DETROIT, Mich. - A Detroit interstate and major corridor through the city got a new name Sunday when an official dedication to the Black troops who fought in the Civil War was unveiled.

An historic highway in Metro Detroit is getting a new name designated to part of the roadway to celebrate the men who organized in 1863 to fight in the U.S. Civil War. The 102nd United State Colored Troop Memorial Highway was unveiled on March 28.

A portion of I-375 was renamed the 102nd United States Colored Troop Memorial Highway, getting the honor in the same spot where the beginnings of the 1,400-man regiment was born.

"You will never overcome anything that you are not willing to confront. and I think that what these men did when they confronted racism, they confronted white supremacy head-on and they won," said Coleman Young II.

The troop was first organized back in 1863, at Detroit's Camp Ward.

Some of the 845 men who signed up were escaped slaves that had made their way north via the underground railroad.

Many of them were young.

"This is Michigan's first and only African American unit during the civil war and the ranks are filled by young guys and that's something we wanted to show and portray," said Maurice Imhoff, of Jackson High School. "All of us here are in high school."

"The history of our 102nd is a pride for our entire nation. The fact that this is a unit that was born here in Detroit Michigan is a pride our entire state," said Lt. Gov. Garlin Gilchrist. 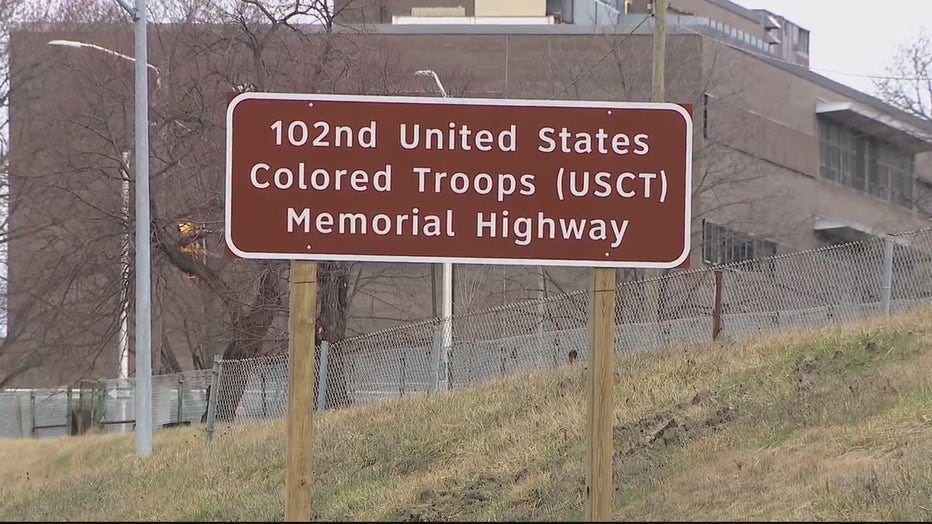 It's been more than five years since a bill approving the highway's renaming passed.

"To name that and have people drive past that, especially since we are honoring colored troops on a freeway that was built to drive through black neighborhoods. I think that history is also very important for us to realize," said Young.

The bill passed in 2015, but it was high school students from Jackson that saw the new law into reality.

"In a year-and-a-half, Michigan raised $3,200 to fund those highway signs and I think that really shows how important this unique piece of history is," said Imhoff

Ten percent of the people that served in the 102nd died during the war.