DETROIT (FOX 2) - A Detroit ice cream store said it will deny service to police officers if they are wearing tactical body armor.

Cold Truth Soft Serve, located at 4240 Cass Avenue, posted a photo on social media of a Detroit police cruiser parked in front of their shop with the caption, "We can tolerate the parking however you please but we will not serve anyone wearing body armor."

The owner, Tim Mahoney, released a statement defending the vegan establishment, which he said prides itself on being a family and community business.

"There are times when police units come through and are outfitted in heavy-duty tactical gear, it is disturbing and unsettling for some of the families in our space. In the last 24 hours, It has come to my attention that the City of Detroit outfits EMS and FIRE with armor, and this is not my concern. It’s the heavy-duty military dress that I’m hoping the city can find a way to minimize in our public spaces."

White said his department is hoping to contact Mahoney and store management to talk about the social media post. 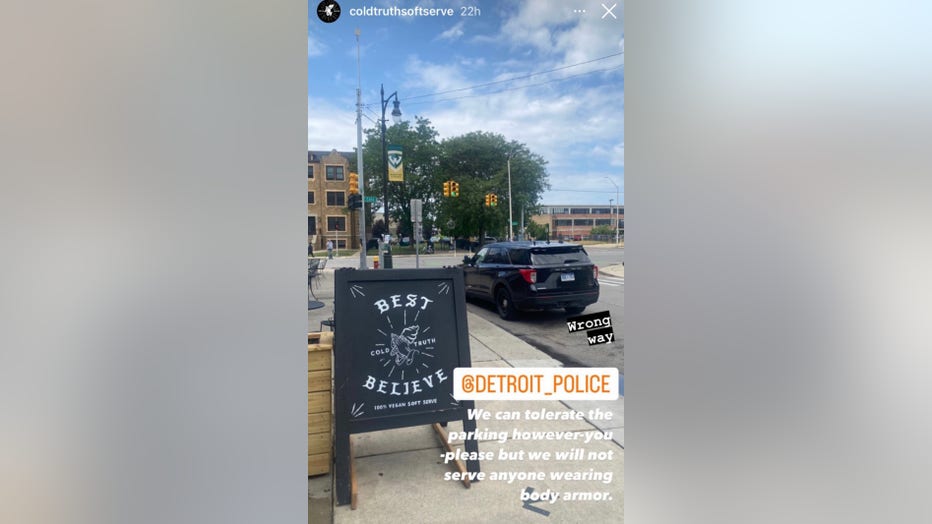 "Law enforcement is a dangerous profession. Body armor provides our officers protection and is an essential part of the police uniform," he said in a statement. "It is the desire of each and every member of the Detroit Police Department to fulfill their duties as a law enforcement officer and at the end of their shift return home to their loved ones.

"Members of DPD wear body armor to protect themselves so they can return home safely.

"We are extremely thankful for the overwhelming response and support we receive from the community. We’ve attempted to reach out to the shop’s owner in hopes of having a thoughtful conversation."

A Detroit police spokesman said that there are no instances he knows of where officers have been denied service at Cold Truth Soft Serve for wearing body armor.

In the meantime, reaction online to the store's online posts spread through some of the first responder ranks and through the community, earning a backlash.

In another social media post, Cold Truth shared a photo of negative reviews (see below) with the caption, "Sorry to all the new visitors, we are not comfortable with Tactical gear/body armor at our space."

A Google reviewer by the name of EMT to RN Ryan wrote: "Trash company that does not support fire, EMS, or police. Calls himself a vet. Should probably strip that title because you're a poor excuse for a vet. Good luck with the new business venture after your business face dives. You're an ice cream shop, not a 5 star restaurant."

Jackelyn W. said:  "The fact that you discriminate and have made it very clear that you will not serve police, the people that keep you safe and if your establishment needed them they would be there in a heartbeat. Terrible service and mediocre ice cream! Boycott this place!!!!!!!"

Stay with FOX 2 for more on this story as it becomes available.

Producer note: An earlier version of this story indicated that officers were turned away for wearing body armor, according to information gathered at the time. 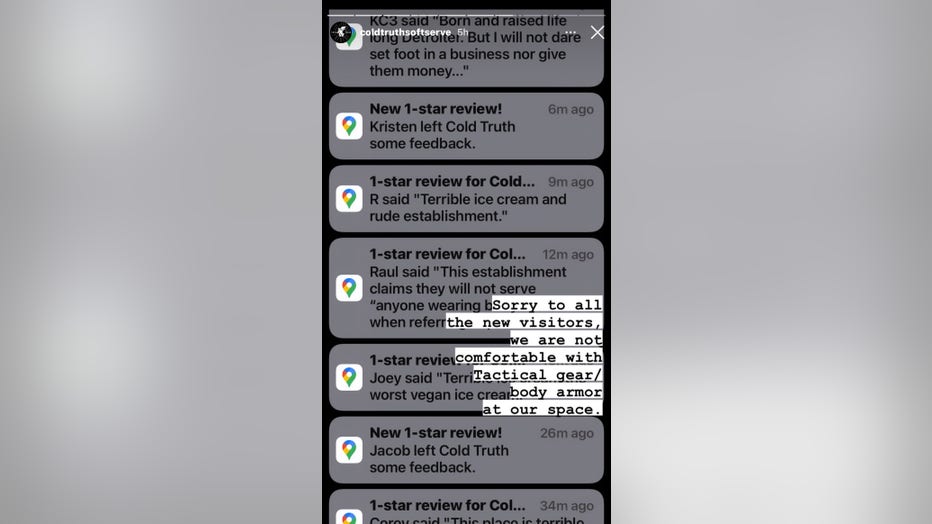