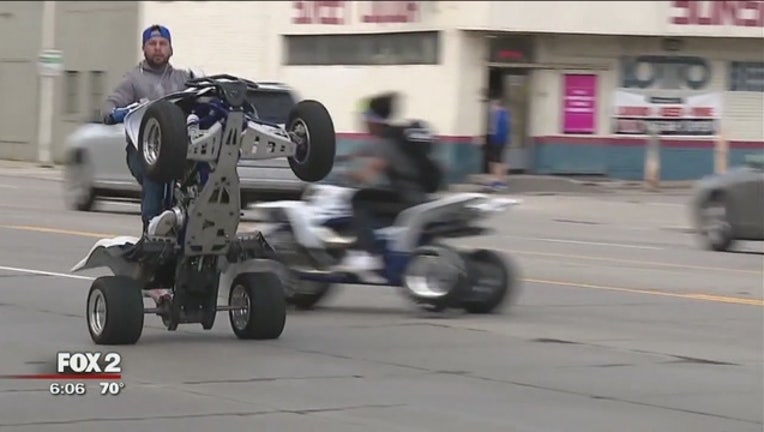 DETROIT (FOX 2) - ATVs are a popular past time in some Detroit circles.

Riders say they are not out to cause trouble; they are just having fun. The problem is ATVs are not street legal.  But now there's a move to designate an area for people to ride them legally.

"We have land on the east side of Detroit, southwest Detroit, Brightmoor area," said Oliver Gantt, a business owner and community stakeholder. "We have enough land where we could put several parks together."

There's a renewed push for parks in Detroit where people can ride ATVs and minibikes legally. It comes as more off-road vehicles are found on them and devastating crashes claim the lives of riders.

Just last week 38-year-old Victor Davis, a father of five, died after crashing his ATV on the city's west side.

The SkyFOX camera was rolling as a group of ATV riders popped wheelies and weaved in and out of traffic in mid-May. That prompted Detroit police to launch a crackdown-impounding several off-road vehicles on the city's east side a couple days later.

"We're going to make a real concerted effort to identify these individuals," said Assistant DPD Chief David LeValley. "It's misdemeanor crime but it is very dangerous."

"If you give them a place to ride that's going to decrease crime because they're not on the street breaking the law," said Ta-muk Scruggs, a community activist.

Scruggs wants to open a recreational complex anchored by an ATV park at Dorais Park near Eight Mile and Mound. People have been riding minibikes on the old Velodrome there for years.

"Let's expose our youth and individuals in the city to something a little bit more positive," he said. "Give them someplace safe to ride (and teach) training skills in the process."

The ATV park idea first gained traction with some Detroiters in 2017 after the death of 15-year-old Damon Grimes, killed by a Michigan State Trooper with a Taser as he rode an ATV on Detroit's east side.

"Seems like since Mark Bessner was sentenced, it seems like the ATV riding has not merely gotten out of control but the guys now are riding to the degree that it's become real bothersome to the community and the police," said Gantt.

Gantt, a close friend of the Grimes' family, was among the first to push the idea of ATV parks. He says he tried to acquire this unused city-owned land turned dumping ground near Chandler Park to develop one, but never got much traction with the city.

Some city officials say the opening of a park for off-road vehicle use would be no walk in the park, from re-zoning to addressing sound nuisance issues, the plan could face challenges.

But Gantt and others believe the benefits outweigh the risks.

"The city should take a very close look at this," Gantt said. "Mike Duggan should call me to the table, call us all to the table, and let's sit down and talk about this. This is very do-able and it needs to be done now."

Teen dead after fleeing MSP on ATV in Detroit

High-ranking cops tell FOX 2 that the ATV park idea could be a good one. In fact, police sources tell me top brass has been in talks with city officials about it. Stay tuned.