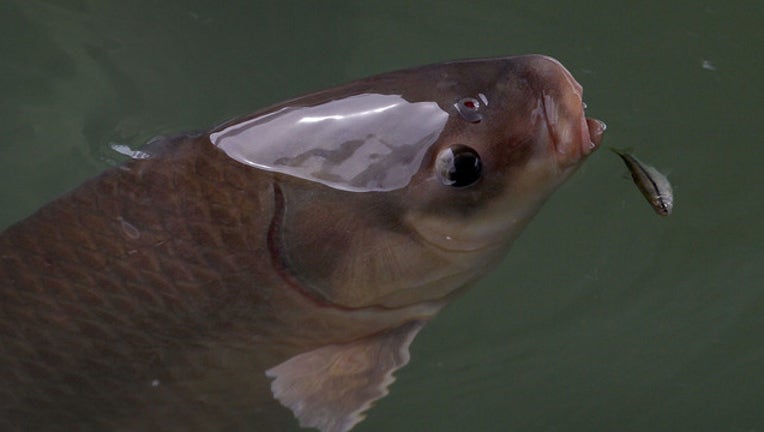 (Associated Press) - Illinois Gov. J.B. Pritzker says he is willing to take initial steps toward fortifying a lock-and-dam system on a Chicago-area waterway so it can protect Lake Michigan from invasive Asian carp.

Pritzker, a Democrat, told the U.S. Army Corps of Engineers in a letter Friday that he had authorized the state's cooperation with preconstruction, engineering and design work at the Brandon Road Lock and Dam near Joliet, Illinois. But he voiced misgivings about the cost and said his state "is not in a financial position to commit to the full plan in its current form."

The Corps has proposed installing devices such as an electric barrier, noisemakers and an air bubble curtain in a specially designed channel to deter fish from swimming upstream and remove those that don't turn back. The adjacent lock would be retooled to flush away unwanted species floating on the water.

An updated version of the plan released last November put the price tag at $778 million, which was much higher than an earlier $275 million estimate. That drew criticism from Illinois, which agreed last year to serve as "non-federal sponsor" of the project.

"I would like to discuss how we can lower the cost of this plan and still effectively address the threat of Asian carp," Pritzker said. "I will not sign a Project Partnership Agreement without a cost control strategy and additional cost sharing among the states."

Corps spokeswoman Samantha Heilig said Monday that Pritzker's letter was forwarded to the agency's headquarters in Washington, D.C., where a final report on the project awaits approval from the chief of engineers.

The Brandon Road complex is on the Des Plaines River, which is part of a waterway network that links Lake Michigan with the Illinois River. The Illinois River is infested with several varieties of Asian carp, which were imported decades ago to cleanse Southern sewage lagoons and fish farms but escaped into the Mississippi River and invaded many of its tributaries.

Scientists say if the Asian carp becomes established in the Great Lakes, it could unravel food chains and out-compete native species.

Environmentalists and some states, including Michigan, have called for walling off Lake Michigan from the Chicago waterway system, which Illinois opposes as disruptive to commercial navigation. The Brandon Road project is considered a compromise.

Former Michigan Gov. Rick Snyder proposed a partnership last year to help cover costs of operating and maintaining the Brandon Road structures, drawing support from Ohio, Wisconsin, the Canadian province of Ontario and Chicago. But former Illinois Gov. Bruce Rauner rejected fellow Republican Snyder's offer of $8 million in support of the arrangement, saying he didn't want to commit to the deal in the final days of his term.

Illinois Sens. Dick Durbin and Tammy Duckworth, both Democrats, supported Pritzker's position in a statement and agreed other Great Lakes states should share the costs.

"Invasive Asian carp are a serious threat to the Great Lakes ecosystem and the region's economy," they said.