WASHINGTON (AP) Opening arguments in the Senate impeachment trial for President  Donald Trump on the charge of incitement of insurrection for the Capitol riot will begin the week of Feb. 8.

Senate Majority Leader Chuck Schumer announced the schedule Friday evening after reaching an agreement with Republicans, who had pushed to delay the trial to give Trump a chance to organize his legal team and prepare a defense. 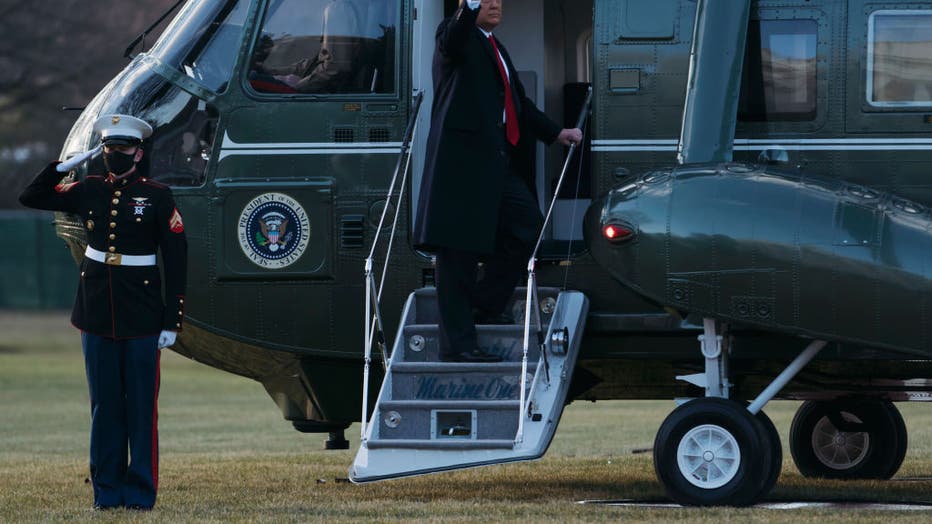 WASHINGTON, DC - JANUARY 20: President Donald Trump and first lady Melania Trump board Marine One as they depart the White House on January 20, 2021 in Washington, DC. President Trump is making his scheduled departure from the White House for Florida

Trump will be the first former president to face an impeachment trial after leaving office.

Under the timeline, the House will transmit the impeachment article against Trump late Monday, with initial proceedings Tuesday, but opening arguments will be pushed to February, which also allows the Senate time to confirm President Joe Biden's Cabinet nominations and consider the COVID relief bill.

"We all want to put this awful chapter in our nation's history behind us," Schumer said about the deadly Capitol siege. "But healing and unity will only come if there is truth and accountability. And that is what this trial will provide."

House Speaker Nancy Pelosi will send the article of impeachment against Trump to the Senate on Monday, triggering the start of the former president's trial on a charge of "incitement of insurrection" in the deadly Jan. 6 riot at the Capitol.

Senate Democratic leader Chuck Schumer announced Pelosi's intentions Friday for the quick trial, rebuffing Republicans' proposal to push the proceedings to mid-February to give Trump more time to prepare his case. Schumer said there will be "a full trial," and "it will be a fair trial."

Unlike any in history, Trump's impeachment trial would be the first of a U.S. president no longer in office, an undertaking that his Senate Republican allies argue is pointless, and potentially even unconstitutional. Democrats say they have to hold Trump to account, even as they pursue new President Joe Biden's legislative priorities, because of the gravity of what took place -- a violent attack on the U.S. Congress aimed at overturning an election.

The trial could start as soon as Tuesday, but timing remains uncertain as leaders negotiate. If Trump is convicted, the Senate could vote to bar him from holding office ever again, potentially upending his chances for a political comeback.

The urgency to hold Trump responsible is somewhat complicated by Democrats' simultaneous need to get Biden's government in place and start quick work on his coronavirus aid package. The trial could halt Senate work on those priorities.

"The more time we have to get up and running ... the better," Biden said Friday in brief comments to reporters.

A trial delay could appeal to some Democrats, as it would give the Senate more time to confirm the Cabinet and debate the new round of coronavirus relief.

Democrats say they can move quickly through the trial, potentially with no witnesses, because lawmakers experienced the insurrection first-hand.

One of the managers, California Rep. Ted Lieu, said Friday that Democrats would rather be working on policy right now, but "we can't just ignore" what happened on Jan. 6.