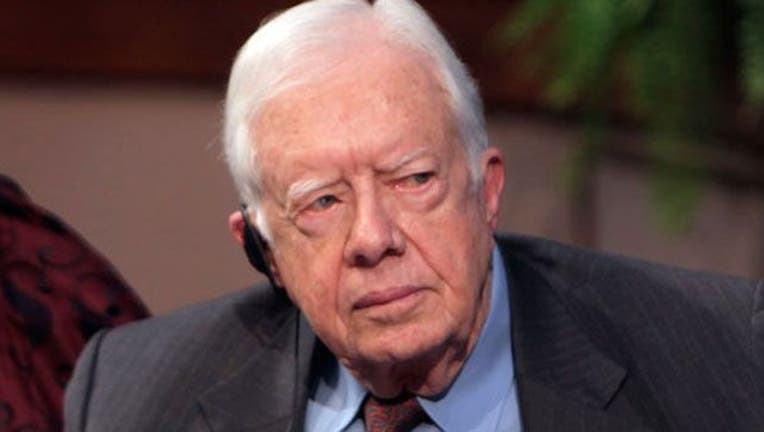 ATLANTA (AP) - Former President Jimmy Carter announced Thursday that he will begin radiation treatment on cancer that is on multiple spots on his brain.

"I get my first radiation treatment for the melanoma in my brain this afternoon," Carter said during a news conference where he talked openly about his cancer and how he would cut back on his work with the Carter Center.

Carter, appearing in a dark blazer, red tie and jeans and surrounded by friends and family, said at first he thought the cancer was confined to his liver and that the operation earlier this month had completely removed it, "so I was quite relieved."

But that same afternoon, an MRI showed it was on his brain.

"I just thought I had a few weeks left, but I was surprisingly at ease. I've had a wonderful life," the 90-year-old Carter said.

Carter announced Aug. 12 that liver surgery found cancer that has spread to other parts of his body. Carter said it's still not clear exactly where the cancer originated.

Doctors not involved in treating Carter have said those characteristics could determine Carter's options for treating the cancer. His father, brother and two sisters died of pancreatic cancer. His mother also had the disease. Carter said no cancer has been found on his pancreas so far.

Carter's health has been closely watched this year. He cut short an election monitoring trip to Guyana in May. A spokeswoman said he did not feel well and Carter later said he had a bad cold.

The center announced Carter had a small mass removed from his liver Aug. 3. Nine days later, Carter said that surgery revealed the cancer.

Carter was the nation's 39th president, advancing as a virtual unknown on the national stage to defeat President Gerald Ford in 1976. But several foreign policy crises, in particular the Iran hostage crisis, crushed his bid for re-election and Ronald Reagan swept into the White House.

The native of tiny Plains, Georgia, rebuilt his career as a humanitarian guiding the center focused on global issues, including health care and democracy. Carter earned a Nobel Peace Prize in 2002, helped defuse nuclear tensions in the Koreas and helped avert a U.S. invasion of Haiti.

He and his wife, Rosalynn, still make regular appearances at events in Atlanta and travel overseas. When the couple is in Plains, Carter frequently teaches a Sunday School class before services at Maranatha Baptist Church. He plans to teach this weekend as scheduled, according to the church.