WILMINGTON, Del. - President-elect Joe Biden and his wife, Jill, will be getting their first dose of the coronavirus vaccine on Monday, joining a number of high-ranking government officials who have received the shot that could eventually put an end to the raging pandemic.

Biden’s incoming press secretary, Jen Psaki, said Friday that the Bidens will receive their shots in public at a Delaware medical facility, where they’ll be thanking workers for their frontline efforts.

Vice President-elect Kamala Harris and her husband, Doug Emhoff, will receive their doses the week after next. 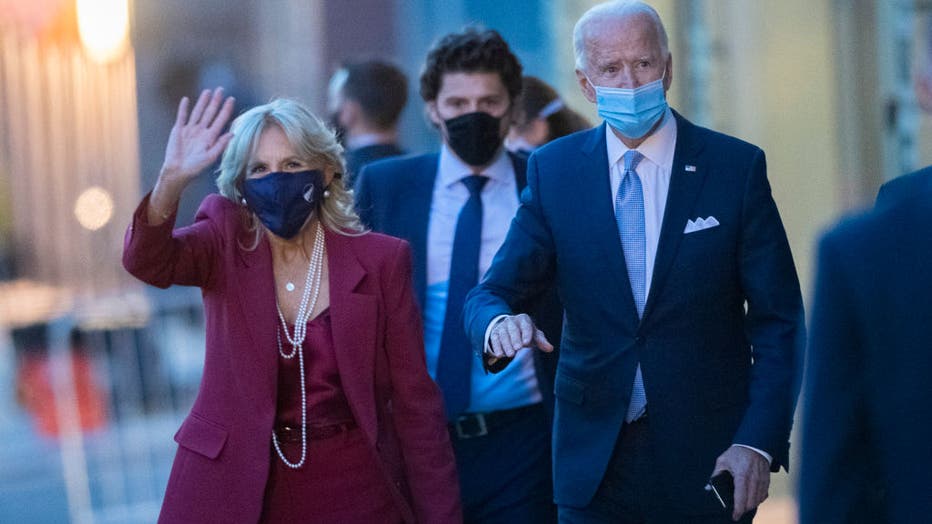 "Hope is on the way," Pence later said during the televised White House event in the Eisenhower Executive Office Building. "The American people can be confident: We have one and perhaps within hours two safe vaccines," he added, referring to the FDA's expected authorization of a second vaccine by Moderna.

A survey from The Associated Press-NORC Center for Public Affairs Research found that only about half of Americans want to get the vaccine as soon as possible. Another quarter of the public isn't sure, while the remaining quarter say they aren’t interested. Some simply oppose vaccines in general. Others are concerned that the injections have been rushed and want to see how the rollout goes.

President Donald Trump, who tested positive for the virus in October and recovered, has not yet received the coronavirus vaccine. White House Press Secretary Kayleigh McEnany told reporters this week that Trump is open to taking the vaccine but his priority is frontline workers and those in long-term care facilities.

"He will receive the vaccine as soon as his medical team determines it’s best," McEnany said.

But Dr. Anthony Fauci, the nation’s leading expert on infectious diseases, has recommended that Trump take it publicly without delay.

"Even though the president himself was infected, and he has, likely, antibodies that likely would be protective, we’re not sure how long that protection lasts. So, to be doubly sure, I would recommend that he get vaccinated as well as the vice president," Fauci told ABC News.

Trump launched Operation Warp Speed — the government campaign to help swiftly develop and distribute vaccines — this spring with great fanfare in the White House Rose Garden. Pfizer-BioNTech received emergency use authorization from the FDA on Dec. 11, and amid its distribution, many have called for Trump to also get the vaccine publicly to help instill confidence in its safety and effectiveness.

Lawrence Gostin, a professor at Georgetown Law who focuses on public health, told the Associated Press that Trump that "deserves a great deal of credit" for Operation Warp Speed and placing a bet on two vaccines that use groundbreaking mRNA technology.

"Having exhibited leadership in the vaccines’ development, he should take great pride in publicly demonstrating his trust in COVID vaccines," Gostin added.