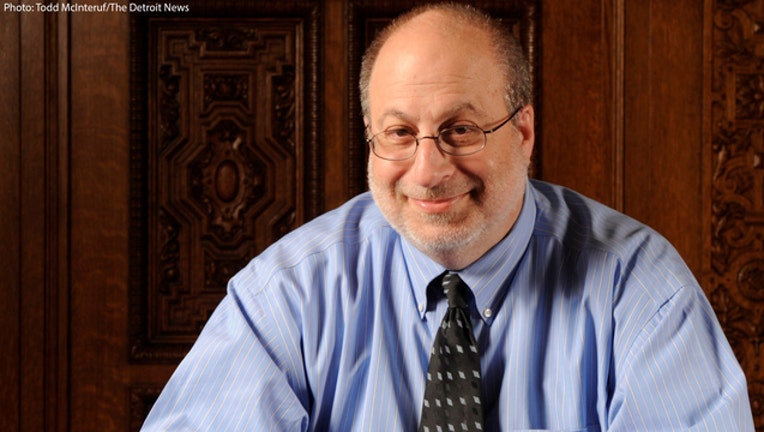 DETROIT (AP) - Jonathan Wolman, who over more than 45 years in journalism served as editor and publisher of The Detroit News and previously worked as a reporter, Washington bureau chief and executive editor at The Associated Press, died Monday in Detroit. He was 68.

His family told the News that Wolman died of complications from pancreatic cancer.

Wolman had been editor and publisher of the News since 2007, running the newspaper during a financially challenging period that included staff layoffs, a cutback to only two days a week of home delivery, and a relocation from the massive headquarters building that it had occupied for nearly a century.

However, Detroit - even as it careened into and then out of bankruptcy in 2013-14 - has survived as one of a shrinking number of U.S. cities with more than one major daily newspaper. The News has a joint operating agreement with its rival, the Detroit Free Press, in which the newspapers consolidate business operations while fielding separate editorial staffs.

"Jon came to Detroit at a time of incredible uncertainty, not only for the News, but for the industry," said the News' managing editor, Gary Miles. "He was a steadying, calming influence who put a priority on the big picture: the accuracy and fairness of our news report."

Miles recalled Wolman's "painstaking analysis" as the paper's management grappled with budget cuts and staff reductions. Even amid the austerity, Miles said, Wolman oversaw expansion of the paper's investigative and projects unit, and maintained a strong focus on national and world news at a time when many regional papers were cutting back.

"He was incredibly kind," Miles said. "Some decisions clearly pained him. But he kept the long-term interests of the News, its staff and its readers, paramount."

Peter Bhatia, editor of the Free Press, praised Wolman as "a magnificent person and an outstanding journalist."

"He has kept his newspaper relevant and engaged in the community and has been a fierce and appropriate advocate for the News in its partnership with the Free Press," Bhatia said.

Wolman's tenure in Detroit encompassed one of the most turbulent periods in the city's history. The bankruptcy filing was preceded by years of plummeting population and tax base; more recently there's been an incomplete but inspiring recovery.

Wolman came to Detroit from Denver, where for three years he was editor of the Denver Post's editorial page.

Prior to his job in Denver, Wolman had a nearly 31-year career with AP, starting in 1973 as a reporter in Madison, Wisconsin.

From 1975 until late 1998, he worked at AP's Washington bureau, rising from reporter to news editor to a powerful bureau chief who focused coverage squarely on politics, the White House and campaigns. He held that post for nearly 10 years before moving to New York to become AP's managing editor, and was promoted to executive editor in May 2000.

In 1981, he was praised by AP managing editor Wick Temple for overseeing coverage of the space shuttle Columbia's first flight.

"Jon pulled it together from all sites, got no bylines and worked 22 hours a day," Temple wrote to other AP managers. "He was a delight."

Later, Wolman helped oversee AP's 1999 Pulitzer Prize-winning report about the 1950 No Gun Ri massacre during the Korean War, as well as AP's coverage of the Sept. 11, 2001, terrorist attacks.

But it was political coverage that was Wolman's career-long obsession and his focus as a journalist.

Some colleagues suggest that one of his finest moments came late on Election Night in 2000, when it was clear that the presidential race between George W. Bush and Al Gore had come down to the closely fought state of Florida. At 2:16 a.m. on Nov. 8, Fox News Channel declared Bush the winner in Florida, and within minutes NBC, CBS, CNN and ABC did the same. The AP said the race was still too close to name a winner.

Wolman, then AP's New York-based executive editor, was in the Washington office at the time while his successor as bureau chief, Sandy Johnson, faced intense pressure to join the networks in calling the election for Bush. But based on input from experienced colleagues, Johnson knew the Florida outcome wasn't clear and stood her ground; Wolman backed her completely. Many news organizations, including AP, had already had to backtrack once after exit polls and an analysis of early returns wrongly indicated that Gore had won Florida.

"He could have pulled rank on Sandy and called it - but that night he knew he was working for her," said Ron Fournier, whose byline was on the main election story. "Jon deserved credit for knowing to trust his people."

AP's non-call was vindicated as the nearly deadlocked election outcome became entangled in a long legal battle before being decided in Bush's favor by the U.S. Supreme Court.

"He took a chance on people, putting them in roles that perhaps they weren't obviously ready for, including me," she recalled. "He created an esprit de corps in Washington that in turn set the bar higher for all of us."

Louis D. Boccardi, AP's president from 1985 to 2003, said that Wolman - for all his versatility in management - "was at heart a reporter."

"I never saw him happier than when he was working with writers on a big story or with a team shaping a report on a major investigation," Boccardi said. "He was a newsman, through and through."

Carole Feldman, a veteran reporter and editor at the Washington bureau, described Wolman as a supportive boss "who mentored new people coming into the bureau and put his trust in them to handle the biggest story."

"He read more than anyone I know. He didn't sleep much," Hunt recalled. "He was demanding, sometimes blunt and direct. But always fair."

"He lived and breathed politics, and he made the Washington bureau a strong, competitive force in national political coverage," Buzbee said.

Wolman grew up in a newspaper family. His father, Martin Wolman, sold papers as a boy and was publisher of the Wisconsin State Journal in Madison from 1968 to 1984.

Jon was among five children of Martin and Anne Wolman. One of his siblings, Jane, died in a car crash in 1967; the others include Nicky, Lewis and Ruth.

He is survived by his wife, Deborah Lamm; three children: Jacob, Emma and Sophia, and Emma's husband, Ian Irvine.