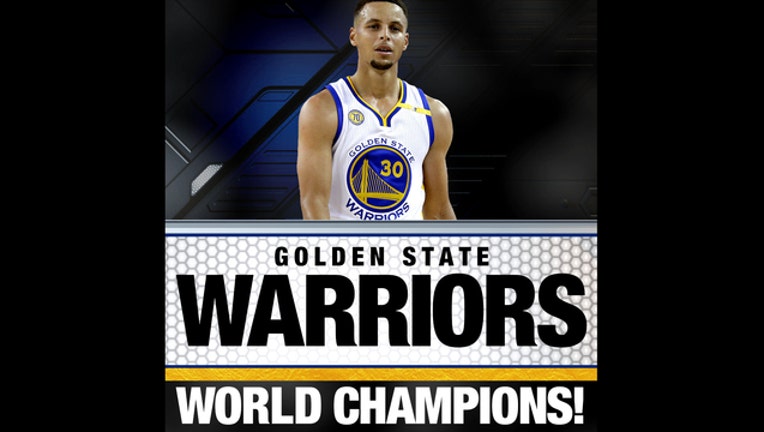 OAKLAND, Calif. (AP) - Kevin Durant capped his spectacular first season with the Warriors by bringing home that coveted NBA championship he joined Golden State last July so determined to get, scoring 39 points in a fast-and-furious, Finals-clinching 129-120 victory over LeBron James and the Cleveland Cavaliers on Monday night.

Stephen Curry added 34 points, 10 assists and six rebounds as Golden State closed out its second title in three years after squandering a 3-1 lead a year ago to the Cavs to miss a repeat. That stung ever since, and even Durant understood, because he gave up the same lead to the Warriors a round earlier with Oklahoma City.

James, who in 2012 with Miami beat the Thunder in Durant's only other Finals, wound up with 41 points, 13 rebounds and eight assists. Kyrie Irving followed up his 40-point gem in Friday's Game 4 with 26 points but shot 9 for 22.

This time, King James gave way to KD, who was the NBA Finals MVP 10 years after being picked second in the NBA draft behind Greg Oden.

Durant drove left, right and down the middle, knocked down 3-pointers, dished and dunked. He knocked down a 17-foot fadeaway over James early in the fourth quarter, then assisted on a 3-pointer by Andre Iguodala the next time down as the Warriors pulled away.