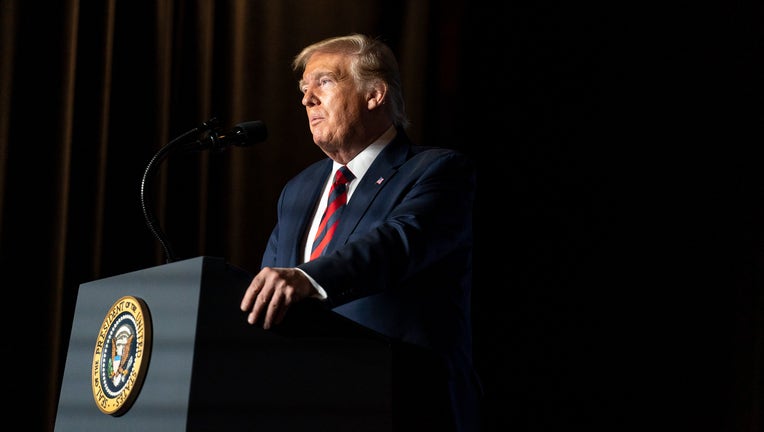 President Donald Trump speaks with then-President-elect Volodymyr Zelenskiy to congratulate him on his election victory. The White House says in a readout of the call that the president underscored unwavering support for Ukraine’s sovereignty and territorial integrity and expressed his commitment to work with Zelenskiy to implement reforms that “strengthen democracy, increase prosperity, and root out corruption.”

Lt. Col. Alexander Vindman, a national security official working at the White House, becomes aware that military aid to Ukraine has been held up. He testified later that he received a notice from the State Department. “That’s when I was concretely made aware of the fact there was a hold placed,” he said in testimony to lawmakers.

A meeting at the White House with Ukrainian officials is cut short when Gordon Sondland, the U.S. ambassador to the European Union, says he has an agreement with acting White House chief of staff Mick Mulvaney that Ukraine’s president would get a meeting with Trump if Ukraine agreed to open investigations. Then-national security adviser John Bolton “stiffened” and ended the meeting, later telling colleague Fiona Hill to report it to the National Security Council’s lawyer, she testified.

“I am not part of whatever drug deal Sondland and Mulvaney are cooking up on this,” Hill says Bolton told her.

In a secure call with national security officials, a staff member of the White House Office of Management and Budget announces there’s a freeze on Ukraine aid until further notice, based on a presidential order to the budget office.

Special counsel Robert Mueller testifies before Congress that Trump was not cleared of obstructing justice, nor was he completely exonerated in the Russia probe, as Trump has contended. Mueller issues a stark warning about the dangers of Russian interference in American elections.

Trump has a second phone call with now-President Zelenskiy during which he solicits Zelenskiy's help in gathering potentially damaging information about his principal Democratic rival, former Vice President Joe Biden.

An unidentified CIA officer files a complaint with the agency alleging misconduct during the president's July 25 call, according to a person familiar with the matter.

U.S. Special Representative for Ukraine Negotiations Kurt Volker visits Kyiv and meets with Zelenskiy and various Ukrainian political officials, according to a whistleblower complaint addressed to Congress and delivered to the intelligence community's inspector general. Sondland also participates, and the two reportedly provide advice on how to "navigate" the president's demands.

Also, Trump speaks by phone with Sondland while the ambassador was in a Kyiv restaurant. William Taylor, the acting U.S. ambassador to Ukraine, later tells lawmakers that one of his staffers overhead parts of the conversation.

Sondland told the president that the Ukrainians were ready to move forward, and after the call, one of Taylor’s staffers asked Sondland what Trump thought about Ukraine. “Ambassador Sondland responded that President Trump cares more about the investigations of Biden, which Giuliani was pressing for,” Taylor testified.

Trump lawyer Rudy Giuliani reportedly travels to Madrid to meet with one of Zelenskiy's advisers, Andriy Yermak, according to a whistleblower complaint.

A whistleblower complaint bearing this date and intended for Congress states: "In the course of my official duties, I have received information from multiple U.S. Government officials that the President of the United States is using the power of his office to solicit interference from a foreign country in the 2020 U.S. election." The complaint is addressed to Sen. Richard Burr, R-N.C., chairman of the Senate Select Committee on Intelligence, and Rep. Adam Schiff, D-Calif., chairman of the House Permanent Select Committee on Intelligence. It does not reach them until Sept. 25.

The whistleblower's original complaint to the CIA is brought up by Courtney Simmons Elwood, general counsel for the CIA, during a call involving U.S. national security officials, including John Eisenberg, a White House lawyer, and John Demers, who leads the Justice Department's national security division, according to a person familiar with the matter. Toward the end of that conversation, Elwood says she has received a complaint from someone who raised concerns about a White House phone call they heard about, the person said.

Demers goes to the White House to review materials associated with the Zelenskiy call.

Michael Atkinson, the inspector general for the intelligence community, sends a letter to the acting director of national intelligence informing him that the IG's office has received a complaint addressed to Congress of "urgent concern" about a call between Trump and Zelenskiy. The inspector general says he believes the conversation could have amounted to a federal campaign finance crime.

Politico reports that the military aid to Ukraine is on hold, setting off a scramble among diplomats in Ukraine and the United States.

The Justice Department's office of legal counsel sends a memorandum to a lawyer at the Office of the Director of National Intelligence, finding that the "alleged misconduct does not involve any member of the intelligence community" and concludes that the Aug. 12 complaint does not meet the statutory requirement as a matter of "urgent concern" that would require it to be forwarded to Congress.

The inspector general for the intelligence community sends a letter to Schiff and Devin Nunes, ranking member of the House Intelligence Committee, about the whistleblower's complaint, saying that withholding it "does not appear to be consistent with past practice" because the acting DNI, Joseph Maguire, is not permitting its release to Congress. Atkinson, the inspector general, said in the letter that he is working with Maguire to try to bring the whistleblower's concerns to Congress.

The White House informs lawmakers that it is releasing $250 million in military aid to Ukraine. The United States began providing military aid to the government of Ukraine shortly after Russia illegally annexed Ukraine's Crimean Peninsula in 2014. The $250 million in funding had been delayed because "The President has been consulting with his national security leadership team to determine the best use of Ukraine security assistance funds to achieve US national security interests," Office of Management and Budget staff wrote in an email to House Appropriations Committee staff aides.

Atkinson testifies behind closed doors to members of the House Intelligence Committee about the whistleblower's complaint. Atkinson does not give details about the substance of the complaint.

Also, the president begins responding to published reports about his phone call, tweeting that he understands many people from various U.S. agencies listened in. "Knowing all of this, is anybody dumb enough to believe that I would say something inappropriate with a foreign leader while on such a potentially "heavily populated" call. I would only do what is right anyway, and only do good for the USA!"

House Speaker Nancy Pelosi announces that the House is moving forward with an official impeachment inquiry, saying, "No one is above the law."

Speaker Nancy Pelosi has announced the House is moving forward with an official impeachment inquiry of President Donald Trump.

The White House releases a rough transcript of the president's July 25 call with Zelenskiy, confirming that Trump has pushed Ukraine's leader to work with Giuliani and Attorney General William Barr to investigate Biden and his son. The Justice Department releases a statement saying prosecutors reviewed the inspector general's referral about a possible campaign finance violation and determined that no crime was committed.

The whistleblower's Aug. 12 complaint is also transmitted to Congress.

Democrats condemned what they saw as a clear effort to damage a political rival, now at the heart of an explosive whistleblower complaint against Trump.

The House Intelligence Committee releases a redacted version of the whistleblower complaint, now at the center of Democrats' impeachment probe. The committee also receives testimony from Maguire, who says the whistleblower "did the right thing" by coming forward to report concerns over the White House's handling of the call between Trump and Ukraine's leader.

The House passes a resolution that sets procedures for the impeachment inquiry as Democrats try to counter the Trump administration's criticism of the probe.

The House begins holding public hearings in its impeachment inquiry.