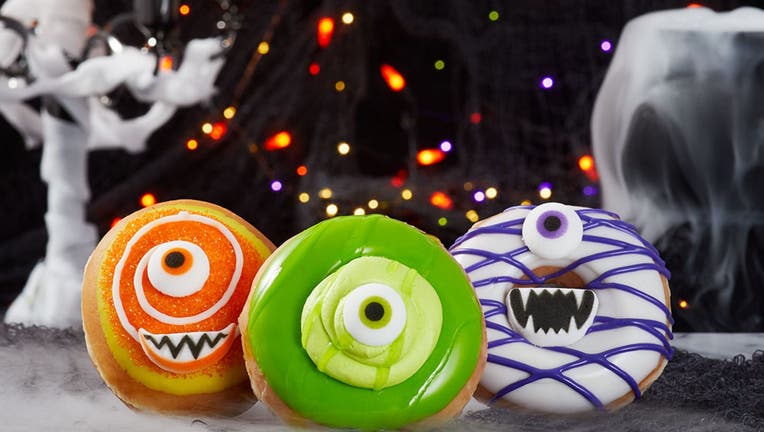 The three new doughnuts will stay on menus throughout October. (Krispy Kreme)

Krispy Kreme has released its own eerie sight with a new collection of cyclops doughnuts to celebrate the Halloween season — though they’re probably more cute than scary.

The brand unveiled its three new confections – and their individual backstories – on Monday, including: the bright green "Slimon," described as a “Slime Monster” made with an original glazed doughnut filled with lemon and topped with green icing; “Mumford,” a mummy-themed doughnut made with an original glazed topped with a “wrapping” of white and purple frosting; and finally, likely the sweetest of all the new offerings, is “Hypno-Henry,” a glazed doughnut filled with cake batter and topped with yellow icing, orange sanding sugar and a white frosting swirl.

If the descriptions alone aren’t enough to send you into a sugar rush, the trio of new flavors is available for purchase at participating Krispy Kreme locations Monday and will remain on menus through Oct. 31.

Those brave enough to dress up on Halloween and make it over to a Krispy Kreme will be rewarded with a free doughnut, the chain also confirmed.