NASA's Mars 2020 Perseverance Rover is heading to the Red Planet to search for signs of ancient life, collect samples for future return to Earth and help pave the way for human exploration. (Courtesy: NASA)

If the real Mars were covered in frosting and cookie crumbs, man would’ve made it there before the moon.

In honor of NASA’s scheduled landing of the Perseverance Rover on Mars this Thursday, Krispy Kreme is offering an all-new "Mars Doughnut" designed to look like the Red Planet itself, with caramel icing and chocolate cookie crumbles.

The doughnut will be available for one day only on Feb. 18, at participating Krispy Kreme locations.

RELATED: Perseverance rover expected to touchdown in Mars on Thursday

"The landing of Perseverance on Mars will be an epic and important achievement," said Krispy Kreme Chief Marketing Officer Dave Skena in a press release. "So, we’re celebrating the best way we know how: with an amazing new doughnut discovery right here on earth."

Krispy Kreme will also be offering the doughnut free of charge to any of the 11 million people who participated in NASA’s "Send Your Name to Mars" program, which allowed NASA’s fans to submit their name for inclusion on a microchip to arrive on the Red Planet with the rover. Those wishing to redeem their free doughnut need only show their NASA-issued "boarding pass" to take advantage of the offer. 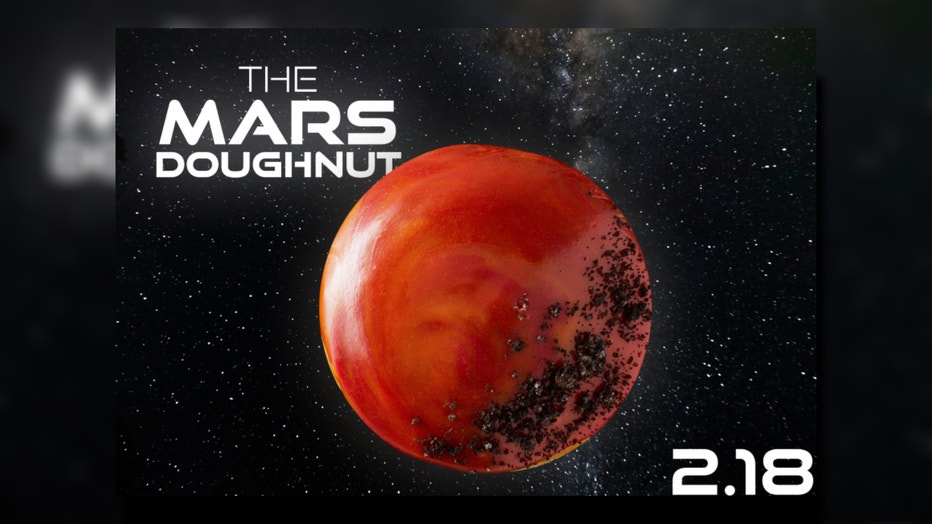 NASA’s Perseverance Rover, which was deployed July 30, 2020, is scheduled to touch down in Mars’ Jezero Crater at 3:55 p.m. EST on Feb. 18. NASA will be streaming the landing live at NASA.gov/NASAlive.