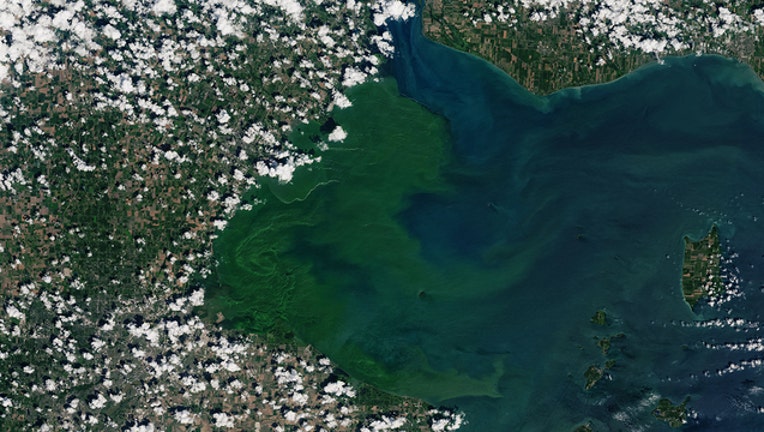 (FOX 2) - As Michigan's summer arches into the second half of the season, the annual algal bloom reports have followed with it.

However, it's no longer scientist's predictions about its size or warnings of what the poisonous bacteria can do to your dog that are making news. It's here, and it's big - like see-from-space big.

NASA's Earth observatory snapped a satellite image of the green blob on Lake Erie on July 30. The image, photographed on the far west side of the Lake Erie just north of Maumee Bay State Park reveals a layer of thick green algae hovering over the water.

Blooms of blue green algae are common on Lake Erie. The product of a rush of nutrients like phosphorus entering the water table, the infusion promotes rapid growth of algae that can be harmful to biodiversity in the water and dangerous to come in contact with for people who use the water for drinking.

Any photographic evidence of the bloom won't come as a surprise to scientist. Earlier in the summer, researchers forecasted a harmful algal bloom (HAB) for Lake Erie. Also not a surprise is the timing of the bloom.

Consistent rainfall earlier in the year kept Lake Erie from warming up as quickly. While that precipitation has impeded farmers from growing crops, it did increase surface runoff from agricultural land near the Maumee River - the location of the largest source of phosphorus that enters Lake Erie.

Notable algal bloom events occurred in 2011 and 2015, when the severity index of those blooms matched or exceeded 10. Researchers anticipated this year's bloom going as high as 9.