Mother shares experience of her son's battle with RSV sickness

When we say we're worried about a virus right now, you think Covid. But there's another virus that is causing concern with local doctors - especially with kids headed back to school and back to daycare.

FOX 2 - A Lake Orion family is facing the cold, flu, and Covid season with extra concern after a baby fought a tough battle with a different virus, the one known as RSV.

"It started with cough no fever, then the cough got worse so we took him in. He had a double ear infection, he was breathing so hard. They always say look for ... the tracial tug ... then the belly breathing ... it looked like he was constantly out of breath," she said.

Ryan had to go on high-flow oxygen therapy to breathe. He was born with an airway disorder, so that likely contributed to his severe bout with RSV. It's a common, contagious lung infection, that usually feels like a cold.

"Kids weren't in daycare. They were isolated, not around other kids," Dr. Minnock said. "People were keeping sick kids away. Now masks are off and everyone is spreading virus we've seen before."

For the Washer family, Covid was the big fear, but baby Ryan recovered from that at home. It was the RSV that was so tough for him to endure.

Now they are extra cautious.

"Shockingly he recovered well.. no lingering effects but those 10 days in the hospital were horrifying," Laura said.

This is where we're reminded to keep washing our hands. Remember, RSV can spread quickly through schools and daycares.

Doctor Minnock reminds us that in most kids, RSV will be mild - but we need to protect those who are more vulnerable.

"This is a virus we've seen, it's not new," she said. "Wash your hands, cover your cough. Keep yourself away from the most vulnerable, the 2 and under group." 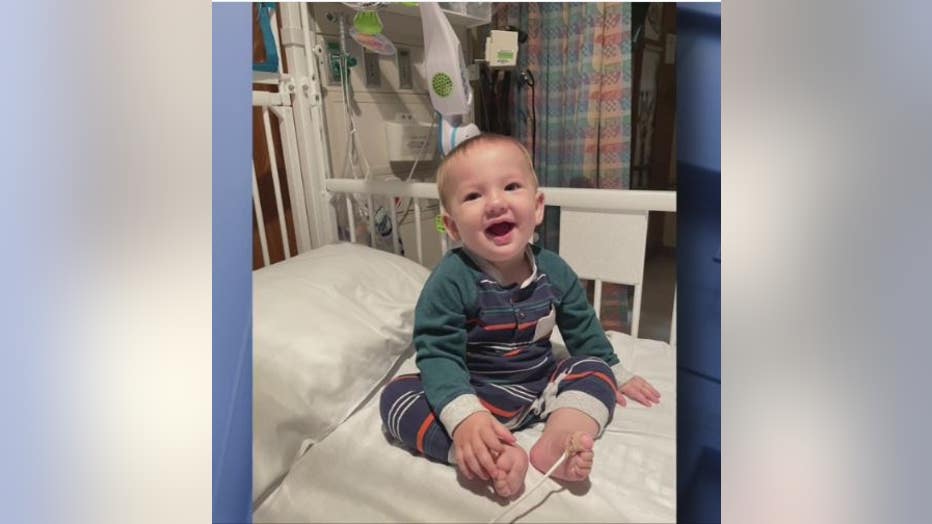 Little Ryan after recovering from his bout with RSV.

There's no real treatment for RSV-  and it's very hard for parents to know if it's a cold, Covid or RSV, so keep an eye on a sick child's fever and breathing.
Usually, it's seasonal, starting in the fall and ending in the spring.

Beaumont had zero cases in January 2021 and last month, in August, there were 105 children hospitalized with RSV.