A new lawsuit alleges that Grand Rapids police used excessive force during an encounter with a passenger after pulling over a car in 2019.

According to the lawsuit, police stopped a driver for speeding. The driver consented to a vehicle search, and she was put in the backseat of a police SUV.

The passenger, Fahirri Dannah, did not consent to be searched. After putting the driver in the police cruiser, an officer went back to talk to Dannah, who was still in the car.

"What are you talking about? I ain’t got no warrant," Dannah said.

"Nope. You got nothing like that. You’re not going to jail," one officer said, while another told Dannah he needed to make sure he didn't have a gun on him before putting him in the police vehicle.

Dannah got out of the car, pulled up his shirt, and told the officer.

Body cam video from shows an officer and Dannah walking out of frame. They cannot be seen until someone yells, and the officer whose body camera is recording runs toward a struggle.

"They took him to the ground abusively, caused great injury, were punching him. They actually knocked him out and accused him of using cocaine," attorney Jon Marko said. "There was no drugs. Not only did they not find any drugs, they did a drug test at the hospital. There was no evidence of any drugs whatsoever."

Body cam video that has been released does not show the alleged assault. Marko said he thinks that footage was either destroyed, deleted, or not released yet.

Photos showed Dannah in the hospital after his confrontation with law enforcement. 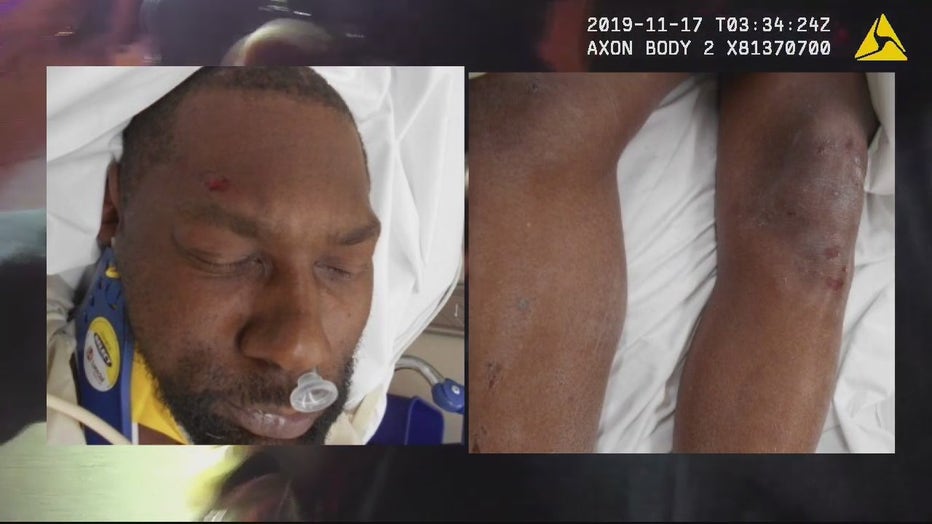 According to the GRPD manual of procedures, an officer may use physical use of force – empty hand strikes and kicks – if resistance continues after verbal warnings. Under use of force escalation and deescalation, Section 3-B says: "Escalation of force may be justified when an officer reasonably believes that the level of force being used is insufficient to stop or control the resistance."

We reached out to the City of Grand Rapids about the incident.

The city attorney said in a statement, "To date, the city has not been served with any lawsuit brought on behalf of Fahirri Dannah. If and when the city is served with such a suit, it will respond in accordance with the applicable court rules and within the confines of the relevant law."

The lawsuit names the city and the five officers involved.

"We want to know why all those other officers who were there, five officers, why nobody did the right thing," Marko said. "Justice looks like holding the people responsible and accountable for their actions and hopefully making just a little bit of change in Grand Rapids.

It is unknown if the officers involved are still on duty.