Walking the route with the USPS on a cold, snowy Detroit day

When the cold wind blows and the snow piles up, the USPS letter carriers don't stop - they layer up.

DETROIT (FOX 2) - For the men and women of the United States Postal Service, snow days are just another day - albeit with several inches of snow slowing them down.

While the snow is packed and the pavements are icy or unplowed and the wind is howling, they're out there making the rounds, visiting a few hundred homes and taking thousands of steps.

Kelly Matthaw doesn't get snow days and, after almost 30 years, this snow is nothing to the letter carrier.

"This is a piece of cake," Matthaw said. "I thought I was going to be walking down the street (waddling), but now I can walk (upright)."

One of the most important things, of course, is layering up - especially when you consider she's outside for 10 or 12-hour long shifts. But she says it's a psychological battle.

"You got to get your head together. It’s a mental thing. I make sure I’m hydrated eating my fruit taking my vitamins - B12 - that give you a burst of energy." she said.

The people on her route help too, by leaving tokens of kindness. One of her favorites is gummy bears but that doesn't help the exhaustion.

MORE: Michigan snow: What type of snow did we get and how much does it weigh?

"Sometimes I go home and I take that shower some nights I don’t eat dinner when you work a 12-hour day eat you an apple, and then you out," she said.

But give her the snow and cold any day compared to a steamy August.

"In the summer months when that heat is there that’s a whole other you can’t hide from the heat," she said.

MORE: Michigan snow: How does snow form and where did it come from?

No matter the weather, for Matthaw it's about having a positive attitude.

"One of my favorite times in the summer months I wear my rain boots up to here and have my shorts on I pretend like I’m a Dallas Cowboy cheerleader - no offense Lions," she said. "Just put a smile on your face and just try and get the mail done." 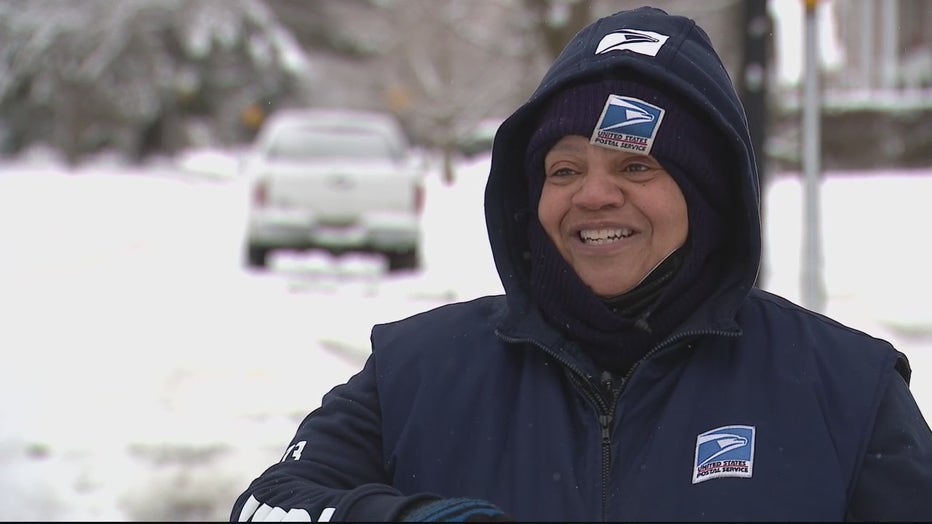 USPS letter carrier Kelly Matthaw says it's a mindset to keep moving when the snow falls each winter.