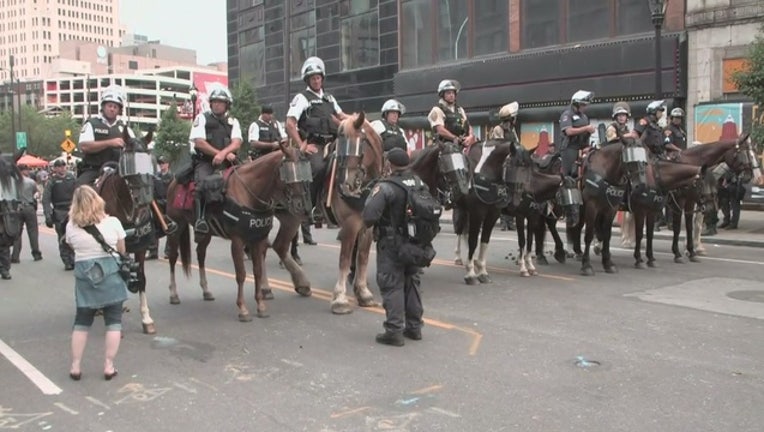 Hundreds of demonstrators for and against Donald Trump gathered in Cleveland's Public Square ahead of Trump's prime-time acceptance speech on the last night of the Republican convention Thursday, and police on bicycles and on foot fanned out to keep hostile groups apart.

The protesters included anarchists, anti-Muslim protesters, Bikers for Trump and those calling themselves pro- and anti-capitalist, but they were almost outnumbered by police, who as usual turned out in force.

The Americans with Charlie LeDuff are on the streets of Cleveland as police and protesters prepare. Watch it live in the video below. APP users, tap here.

They formed barriers across the square to separate protest groups amid scattered shouting matches and scuffles.

A Cleveland officer and a Georgia state trooper were treated for a mysterious skin irritation, police said, amid reports that protesters were putting stickers on police that caused a burning sensation.

Syringes were added to a list of items banned in the protest zone around the convention over concerns that officers could be targeted.

The demonstrations grew in size ahead of Trump's appearance at the convention to accept his party's nomination for president.

In an almost carnival-like scene, state troopers from Indiana played ping pong with people in the square. Women waving pink heart-shaped signs supporting abortion rights danced in a fountain. And demonstrators dressed as nuns on stilts, anarchists wearing bandanas over their faces and religious conservatives vied for attention.

Cleveland Police Chief Calvin Williams was in the middle of it again, riding with a bike patrol unit in the square.

As of Thursday morning, police reported 23 protest-related arrests since Monday, well below what law enforcement officials had feared. Seventeen of the arrests came Wednesday, during a melee that erupted during a flag-burning outside an entrance to the convention arena.

Trump said on Thursday that Cleveland police were doing "an incredible job."

Early in the afternoon, about 150 protesters carrying signs saying "Ban All Trumps Not Muslims" and chanting "Love Trumps Hate" marched across a bridge leading into downtown.

The protest by a group called Stand Together Against Trump drew little notice outside a heavy police presence. Officers on rooftops watched through binoculars, while police on bicycles pedaled along the streets with no other traffic.

Officers got between the marchers and a few conservative religious counter-protesters to make sure no skirmishes broke out.

Meanwhile, organizers of the flag-burning denied on Thursday that the man holding the American flag was on fire and said police used that as an excuse to move in.

Two officers were assaulted and suffered minor injuries, police said. The charges against those arrested included failure to disperse, resisting arrest and felonious assault on a police officer.

Among those arrested was Gregory "Joey" Johnson, whose torching of a flag at a GOP convention three decades ago led to the landmark 1989 U.S. Supreme Court decision that said flag-burning is protected by the First Amendment.

His arraignment was held up Thursday because of what was described as a paperwork delay. The Ohio chapter of the American Civil Liberties Union complained there was no reason for him and the others to be held so long on minor charges.