DETROIT (FOX 2) - What's it like being a Black police officer right now, coping with protests and demands for reform?

It's a question we set out to answer by sitting down with four Detroit police officers and Chief James Craig to see how they tow that line between supporting the Black community and the Black Lives Matter movement right now - but staying true to their sworn oath to serve and protect.

4 Detroit officers, Chief Craig reflect on being Black while wearing the badge

In a special report from FOX 2's Jessica Dupnack, we talk with four Detroit officers and Chief James Craig about being Black while being a police officer.

"I got Black sons. I got young sons that are out there and I'm concerned," said D. Robinson, a neighborhood police officer with Detroit's 11th precinct.

"I hate to see when people take that situation and try to make it look like it's something that we all encourage because it's not," said Marcia Williams, who's also a neighborhood police officer with Detroit's 11th precinct.

A by-product though is intense anti-police sentiment, even against Black police officers.

"We're angry too and because I wear the uniform like so many police officers, I'm still an African American man. And I understand what discrimination looks like," Chief Craig said.

"Being a Black man and being a police officer is probably one of the most interesting spaces of conversation right now," Richardson said.

Which begs the question - is it possible to support this movement but also be a police officer at the same time?

"I'm glad our community, our city, held each other down and made sure we were together during this protest we didn't let anything really get out of control like other states," said Marcus Harris II, a patrol officer with Detroit's third precinct.

"We don't wait until something bad happens to start building bridges in communities. This is institutionalized into the department," he said. Craig, who joined the Detroit Police Department at 19 years old working a foot beat on midnights, says the department pioneered race issues in a lot of ways.

This is something exemplified by partners officers Robinson and Williams, neighborhood police officers out of the 11th precinct and both native Detroiters. 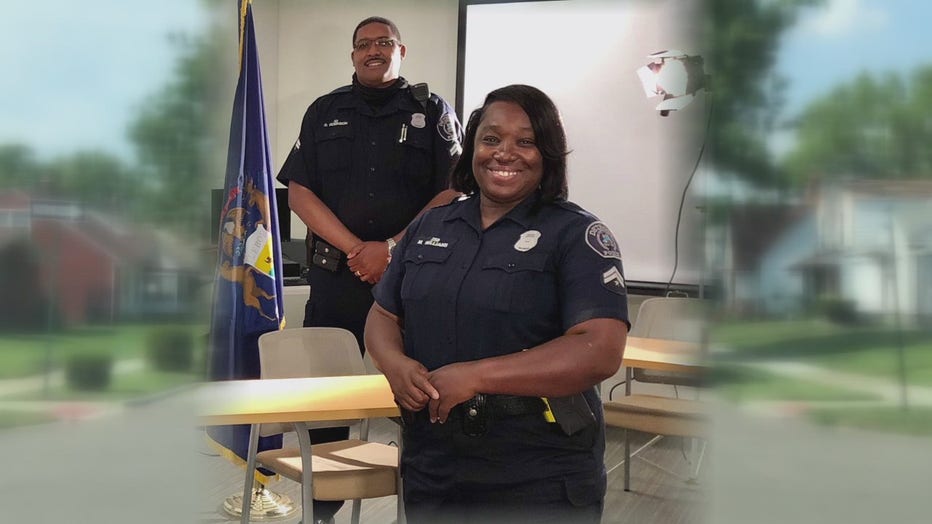 "I still go to the stores, the parks and let people know that, 'Hey I'm here for you. I'm here to bridge the gap between the community and the police," Williams said.

FOX 2 went on a ridealong with Officer Robinson that may look staged, but it wasn't. He bought snacks from the kids' streetside table and played with some others.

"You can find me in a group of young men that maybe don't care for the police officers and then once they realize, 'Hey this guy is from Mack and Bewick, hold on,' and they can relate to me and I can relate to them and that's an opportunity for them to listen," he said.

Right on cue, "D-Rob" walks up to a group of men. You could feel the hostility; our cameras even hung back. But within a matter of minutes, common ground was found as D-Rob started to tell them about community policing. One of the men said in 36 years, he's never had a police officer talk to him like that.

It seems it's going to take more of these positive encounters to change hearts and minds.

"My dad told me a long time ago people yell, people raise their voice because they don't feel heard and that's our biggest focus right now is to make sure the community is heard," Richardson said.

We asked the officers if they could sit down and talk to protesters face-to-face, what is one thing you'd want them to understand?

Black and "Blue" is a fine line to walk for these officers, with an open invitation to be the change you want to see.

"If you don't like how the police are being, become a police. We are hiring," Williams said.