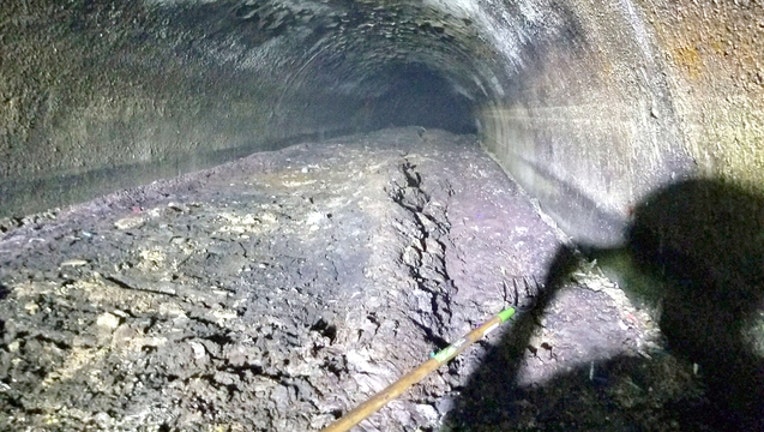 The Macomb County Public Works Office released this picture of a huge fatberg found in a Clinton Twp sewer line.

MACOMB COUNTY, Mich. (WJBK) - Officials in a suburban Detroit community are hoping to use the discovery of a large fatberg in a sewer line to educate the public about what shouldn't go down the drain.

The Macomb County Public Works Office announced Tuesday night that workers cleared an 11-foot-diameter pipe in Clinton Township that was partially clogged by the collection of oils, grease, fat and solid items such as baby wipes. It was about 100 feet long, 11 feet wide, and as much as 6 feet tall.

Macomb County says this is the largest fatberg in memory of sewer workers in the county.

Public Works Commissioner Candice Miller says in a statement Tuesday that the "gross" fatberg "provides an opportunity ... to talk with people about the importance of restricting what goes down our sewers." Officials say grease and baby wipes, for example, should be kept out of the sewers.

Fatbergs happen in sewer systems around the world. Last year, a Fatberg in Baltimore caused a blockage that spilled more than a million of gallons of sewage into a river. Earlier this year, a similar blockage caused 300,000 gallons to back up at the University of Michigan.