A man charged with making multiple threats against families outside of a Michigan synagogue made more anti-sematic threats against the judge as he was ordered held on a $1M bond.

BLOOMFIELD HILLS, Mich. (FOX 2) - A man charged with threatening families and staff at a Bloomfield Hills synagogue went on a rant during his arraignment where he insulted the judge by calling her a 'Jewish b****' and flipped off the court.

Hassan Yehia Chokr was charged with making antisemitic and racist threats to parents, young children and security at Temple Beth El; a preschool and synagogue in Bloomfield Hills.

On Sunday, Chokr was arraigned on the charges via video in Judge Julie Nelson-Klein's courtroom where he was ordered held on a $1 million bond.

As the judge was announcing terms in case he makes that bond, Chokr called her a 'f****** Jewish b****' and then flipped off Judge Nelson-Klein and then said "god's going to judge you the way you're judging me."

Chokr then called the judicial system bull sh** and said that it would collapse.

"Your system's going to collapse. You're taking my freedom of speech away, my freedoms away - at the end of the day, your freedoms are going to be stripped away from you. You will not see heaven, and you will be doomed to hell and you will see that my words are true. You go ahead and give me that harsh punishment, and you will see the punishment that God's going to give you," Chokr said. "I'm a God-fearing man and I don't hurt nobody. I don't have no intent to hurt nobody. I was exercising my freedom of speech."

Chokr was arrested on Friday after police said he made multiple threats and hate-filled rants outside of the synagogues' daycare. When police pulled him over that day, Bloomfield Township Police Chief James Gallagher said the evidence wasn't strong enough to merit an arrest on ethnic intimidation.

"The ethnic intimidation has to have some kind of act with the verbiage where the individual feels threatened," Gallagher said.

After his run in with police, Chokr posted a video of himself trying to buy a gun at a Dearborn gun store. Throughout the day on Friday, investigators kept close tabs on him while they continued to gather additional evidence.

That additional evidence was uncovered by police in the form of a video that Chokr posted - intimidating parents dropping their daycare-aged children off and security guards at Temple Beth El.

Chokr was already out on a personal bond of a charge of assaulting a Detroit Police Officer in July 2020. He was due for a trail next year. 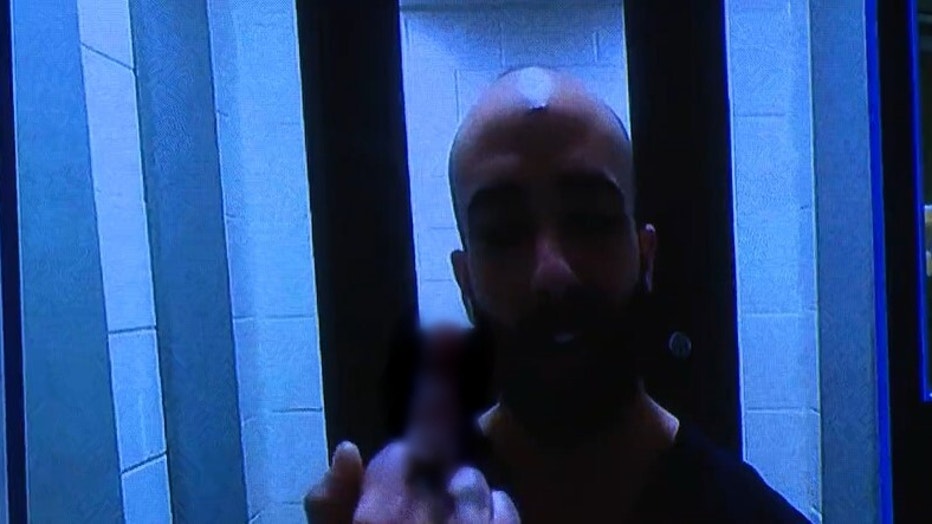 Hassan Yehia Chokr, 35, flips off a judge after being arraigned on a charge of making antisemitic and racist threats at a Michigan synagogue.