DETROIT (FOX 2) - Police are looking for two suspects while a man shot in the face during a carjacking at a Detroit gas station is expected to survive.

It was 1:30 a.m. Friday when the owner of Clark Gas Station in Detroit, Abraham Almaisari, was helping out one of his regular customers.

It was 1:30 a.m. Friday when the owner of Clark Gas Station in Detroit, Abraham Almaisari, was helping out one of his regular customers.&nbsp;Video courtesy of WWJ Radio

"He came for cigarettes," he said.

The customer left to walk toward his vehicle, but he is stopped by two men.

"They walked up to him and asked him for some change and he was going into his pocket to give him change," Abraham said.

Man shot in head during carjacking at Detroit gas station

"I heard a gunshot. I just heard him saying why, why," he said. "Me and my coworkers, we look out the window, we see him on the floor."

The owner says he also recognized the suspects.

"I'm looking out the window and I know the two kids they come here too," he said.

As the victim fell to the ground bleeding from his injury, the gas station owner jumped into action.

"Grab him trying to stop bleeding, took a couple of shirts, thermals, wrapped it around him, called the ambulance," he said.

But for the owner, his only concern was keeping the victim alive.

"I was scared for him. I was talking to him, trying to keep him calm. He was on the phone, he called his wife," he said.

The victim's family says he will survive his injuries.

"His daughter came this morning and said he's doing better now. She said the bullet went through his cheek, through his nose and out," Abraham said.

As police continue searching for suspects, the victim's vehicle has since been recovered and police are searching it for evidence. Investigators are also reviewing surveillance video captured at the scene. 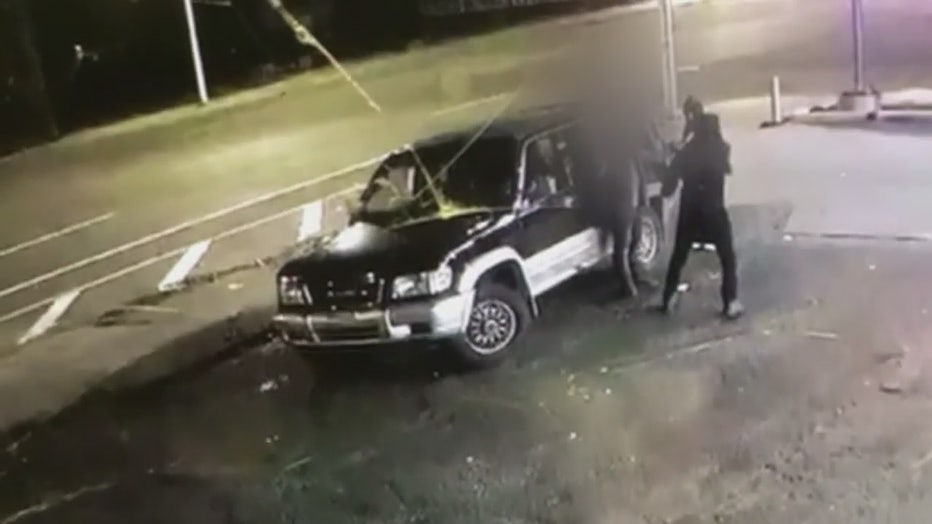 The gas station owner has this message for the suspects:

"That was a coward move. Honestly, turn yourself in," he said.