GROSSE POINTE PARK, MIch. (FOX 2) - Three weeks ago, JeDonna Dinges found a full gas can in her backyard trash bin and put up a camera to see any future activity. It faced the neighbor's house and, in an apparent response to her home security cameras, he put a flag for the Ku Klux Klan that faces her dining room.

A dispute between neighbors that ended up in a symbol of racial hate is being investigated by police in Grosse Pointe Park.

The Grosse Pointe Park woman talked to FOX 2 Wednesday night about the problems with her neighbor. The man isn't talking to investigators but the prosecutor's office will decide whether or not he faces charges.

Grosse Pointe Park Interim Public Safety Director Lt. Jim Bostock said he was called and, when he got to the address to see what was going on, it was gone.

"By the time I got the call, to the time the flag was down, was less than an hour," said Bostock

The KKK flag or sign went up and faced Dinges' home. She said her neighbor put the racist message up in response to her efforts to keep herself safe.

Was there a crime committed? That's a question for the Wayne County Prosecutor's Office. The sign is down and the owner is not talking to the police.

Bostock said that police have been called to the area before but for anything like this.

"There was some (police) runs there, but nothing specific to the two neighbors having trouble," he said.

Dinges said she's hurt by what happened but the fallout isn't all bad. She said she's gotten support from the community, including Bostock and the rest of the Grosse Pointe Park Police. 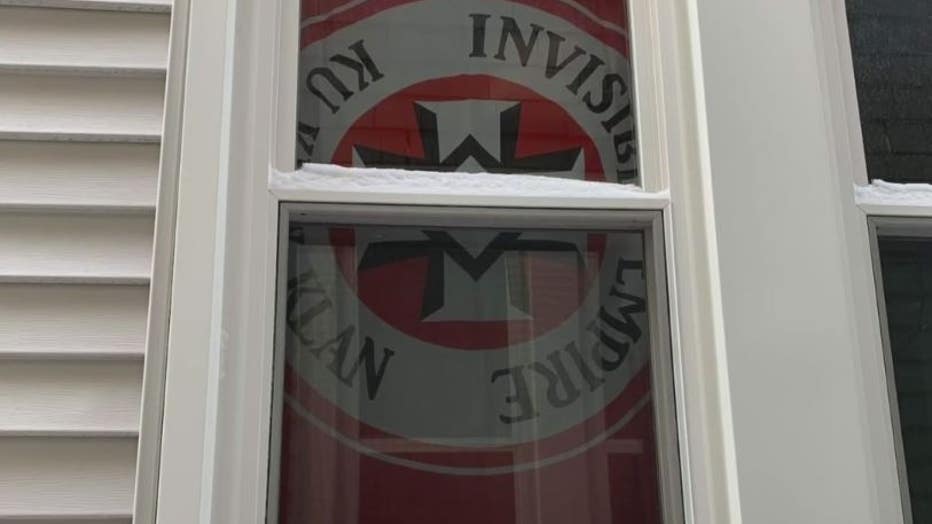 "I'm overcome with emotion at the love and support that I've received from strangers in my community," she said. "People I have never met, reached out to me. I have  134 friend requests."

"That sort of intimidation, hatred, divisiveness, that has no place in Grosse Pointe Park, that’s not welcome here," said Bostick.

Dinges is the owner of a boutique in Ferndale, a small business hit by COVID, called Margaux & Max. If people want to show their support to her, they can check out her shop and support Black-owned businesses.