TRENTON, Mich. - "I had the state police forensic truck back into my driveway and turnaround. I was like what's going on?"

That's David McCrowne who lives nearby who eyed a curious sight in his neighborhood Monday night. It was a Michigan State Police Crime Lab van in front of a house on the 5500 Block of Wilson in Trenton.

But what McCrowne saw probably wasn't as odd as what the investigators were looking at - it was a human skull found in a fire pit.

A disturbing story out of Trenton where a human skull was found in a fire pit has a lot of unknowns. But what is known is the previous owner died in a shootout with police in a Tennessee county in late June.

The people who live in the home are new to the neighborhood. They just closed on the property in May. And around 6 p.m. July 6, they made the gruesome discovery.

"It was pretty wild that this happened. I'm a little taken back," said McCrowne.

Also wild is what happened to the previous owner. After Mark Eberly moved out of his home, he made his way down to Tennessee. After being arrested driving on a revoked license and resisting arrest, he was killed in a shootout with police days later during a traffic stop. An officer who noticed him driving erratically pulled him over. Eberly fired at him, hitting the officer in the torso. The officer returned fire. Eberly was later listed as deceased.

That turn of events makes the scene in Trenton even more puzzling.

"He just lost his parents and moved to Tennessee to make a new start. things didn't start out too good for him." said McCrowne. 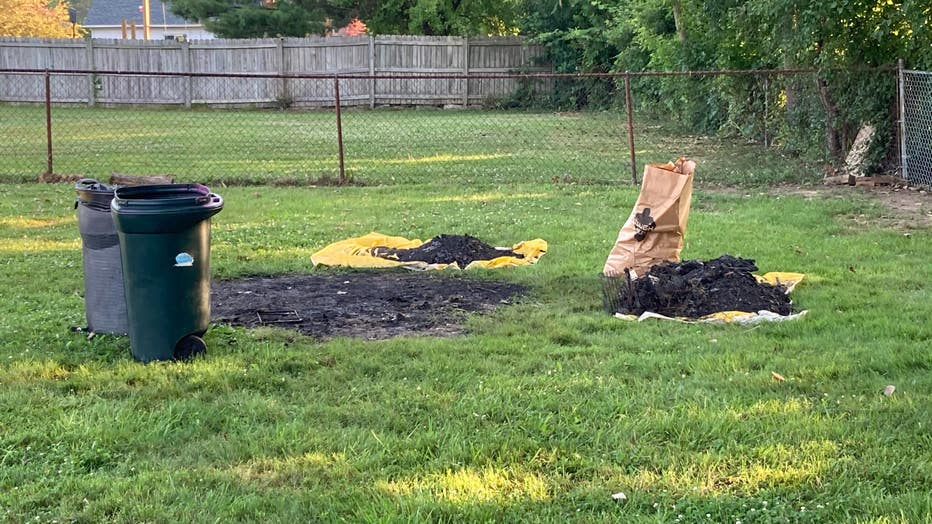 The fire pit where the skull was found.

Eberly's former neighbors told police that before he had moved, he used to have nightly fires in his backyard.

Investigators also found other bone fragments as well and are working to identify the remains. However, that could take up to six months for the agency.