WASHINGTON - More than 24 hours after the violent siege of the U.S. Capitol by a mob of President Donald Trump’s supporters, White House Press Secretary Kayleigh McEnany condemned the violence and said the administration would "ensure an orderly transition of power."

McEnany delivered a prepared two-minute statement from the White House press briefing room and took no questions from reporters.

"What we saw yesterday was a group of violent rioters undermining the legitimate First Amendment rights of the many thousands who came to peacefully have their voices heard in our nation's capital," McEnany said.

"Those who are working in this building are working to ensure an orderly transition of power," she added. "Now it is time for America to unite to come together to reject the violence that we have seen." 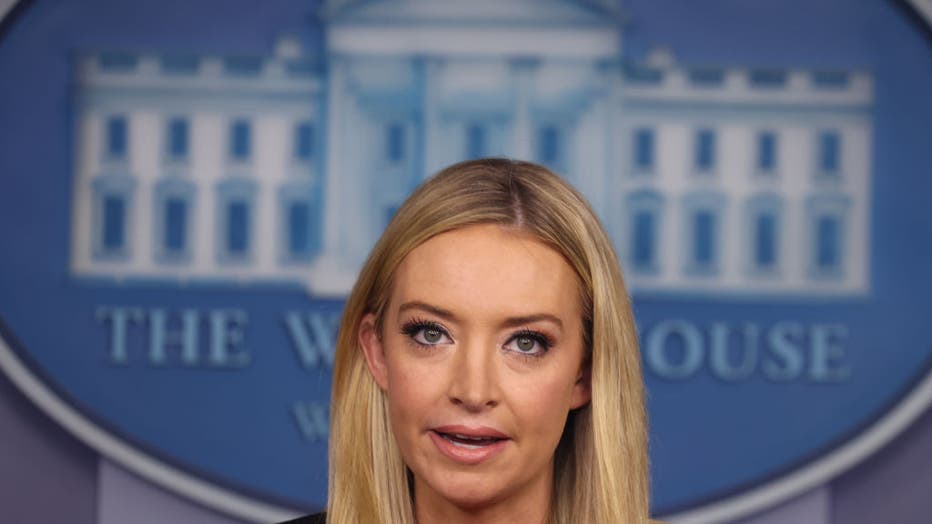 The remarks came after lawmakers of both parties raised the prospect Thursday of ousting Trump from office. House Speaker Nancy Pelosi said that if Trump wasn't removed through an invocation of the 25th Amendment by Vice President Mike Pence, the House may move forward with a second impeachment.

Though Trump has less than two weeks in office, lawmakers and even some in his administration began discussing the issue Wednesday afternoon as Trump first refused to forcefully condemn the violent assault on the U.S. Capitol by a mob of his supporters, and then appeared to excuse it.

Senior Trump administration officials raised the long-shot possibility of invoking Section 4 of the 25th Amendment — the forceful removal of Trump from power by his own Cabinet.

Most Democrats, and many Republicans, put the blame squarely on Trump after hundreds of protesters bearing Trump flags and clothing broke into the Capitol on Wednesday and caused destruction and mass evacuations. The rioters were egged on by Trump, who has spent weeks falsely attacking the integrity of the election and had urged his supporters to descend on Washington to protest Congress’ formal approval of Biden’s victory.

Some Republican lawmakers were in the midst of raising objections to the results on his behalf when the proceedings were abruptly halted by the mob breaching the U.S. Capitol building, breaking windows, ransacking lawmakers’ offices and eventually making their way into the House chamber.

The president exhorted his followers to action Wednesday morning at a rally outside the White House, where he urged them to march to the Capitol. He spent much of the afternoon in his private dining room off of the Oval Office watching scenes of the violence on television.

At the urging of his staff, he reluctantly issued a pair of tweets and a taped video telling his supporters it was time to "go home in peace" — yet he still said he backed their cause and repeated false claims that the election had been "stolen" from him.

In the video posted to Twitter, he called the protesters "very special," saying "we love you," and continued to repeat false claims of widespread voter fraud to explain his loss.

On Wednesday, Twitter for the first time locked Trump’s account, demanding that he remove tweets excusing violence and threatening "permanent suspension." Facebook and Instagram said Thursday they will bar Trump from posting at least until the inauguration of Biden.