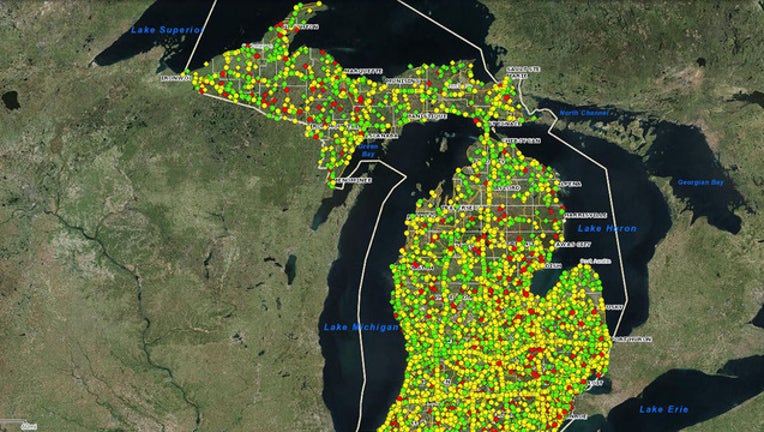 (FOX 2) - Hey all you amateur civil engineers, there's a new toy hot on the market made just for you.

The Michigan Department of Transportation has published a new interactive map detailing the status of every bridge in the state. Federal law defines a bridge as "a structure carrying traffic with a span greater than 20 feet."

If that fun fact didn't pique your interest, then maybe the experience just might. The satellite image is layered with yellow, green and red dots that identify every one of the 11,000 bridges in Michigan.

"We're very excited about the new dashboard," said Matt Chynoweth, head of the MDOT Bureau of Bridges and Structures in the press release. "This supports both the governor's and state transportation director's objectives of transparency in government. It's a great tool, allowing the public to easily look into the condition of any bridge, MDOT or locally owned."

In prior maps, only bridges along the National Highway System were displayed. One would have to go further down the rabbit hole to find the status of bridges along other roads. Now, viewers can click on a structure and learn its location, the year it was built and the condition it's currently in.

The time honored tradition of complaining about the status of Michigan's roads, bridges and stormwater systems is a popular one among its residents. In 2018, the state received a D+ on its infrastructure report card - a whole plus-sign better than 2017's score.

Despite the dismal score, which graded almost half of Michigan's infrastructure with Ds, the state's bridges remain a (relative) bright spot. Scoring a C-, the score card said "Innovative bridge replacements (i.e. bridge slides and the use of prefabricated bridge elements) have helped reduce travel delays and disruptions during construction of new bridges in the last few years."

The summary also praised a 2015 step by the legislature to increase investment into the state's transportation network. However, it also stated that current funds would not be enough to address the current deterioration.