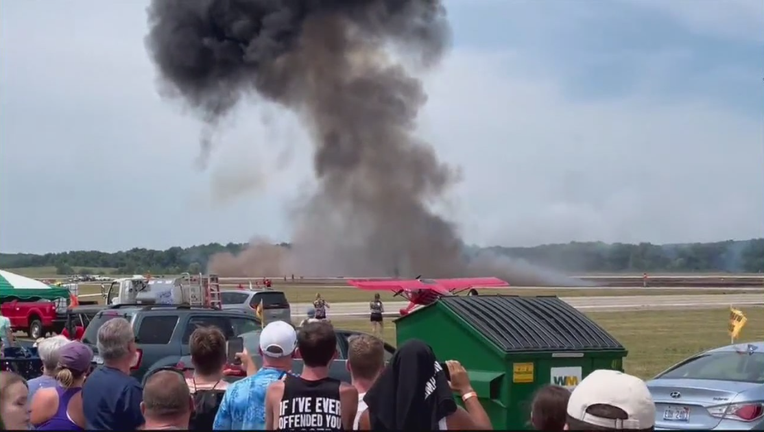 LANSING, Mich. (AP) - The father of the jet engine-powered semitruck driver who died during a performance at a southwestern Michigan air show said Tuesday that the truck burst into flames after a blown tire ruptured the fuel tank.

Chris Darnell, 40, died in the accident Saturday that happened during a race between the Shockwave Jet Truck and two airplanes at the Battle Creek Field of Flight Air Show and Balloon Festival. No one else was injured in the accident.

"As the tire came apart it ruptured the fuel tank on the left side of the car and that, of course, initiated the fire. It happened so quickly that Chris didn't even have time to react," Neal Darnell, the driver's father, told The Associated Press.

Video from an audience member shows the truck catching fire before flipping down the runway at Battle Creek Executive Airport.

Neal Darnell, who also drives the Shockwave, said he concluded what happened after watching video of the accident and inspecting the jet truck. He said this was the only accident Darnell Racing Enterprises has had in 20 years.

Battle Creek police and fire officials did not immediately respond Tuesday to a request by The Associated Press seeking further comment about an investigation into the crash.

"Most people don't like their jobs. Chris loved his job. He would say on a fairly regular basis that he was living the dream and I loved that for him," Darnell said.

The family is waiting for an autopsy report to learn the official cause of death.

Chris Darnell leaves behind his wife and two young daughters. A GoFundMe page has been set up for the family.