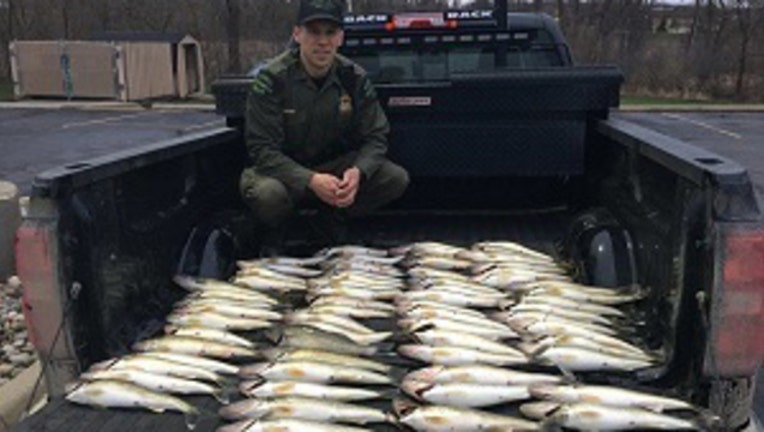 DETROIT (FOX 2) - Three anglers in the Detroit River could lose their fishing licenses after they were caught with 80 walleye - 65 more than the legal limit of five per day.

The Michigan Department of Natural Resources said it received an anonymous tip on its poaching hotline on Thursday that three men were believed to be exceeding the walleye limit on the Detroit River. The caller gave a description of the anglers' car and that they were headed towards Grand Rapids on I-96.

Conservation Officers in patrol in Livingston County found a vehicle matching the description. When the driver changed lanes without signaling, they pulled over the car in Ingham County.

"We asked the driver to be honest and tell us how many walleye the three men had in their possession," said Conservation Officer Jaime Salisbury. "The driver hung his head and stated, 'too many.'"

The three men admitted to fishing the Detroit River earlier in the day and that they had caught and kept too many fish.

"Conservation officers are fully commissioned state peace officers," said Chief Gary Hagler, DNR Law Enforcement Division. "This gives them the ability to enforce all Michigan laws. In this case, Officers Purdy and Salisbury were able to initiate a traffic stop to seek information about this poaching tip. I want to thank the individual who informed the RAP Hotline about this poaching event - without their assistance, this case may not have been possible."

The driver got a citation for failing to use a turn signal and all three men were issued tickets for possessing too many walleye. A judge will determine the reimbursement fee and whether the poachers will lose their licenses.

The legal walleye limit on the Detroit River is five 15-inch per day. They can also possess two additional days worth of fish, provided they're processed (canned, cured by smoking or drying, or frozen).