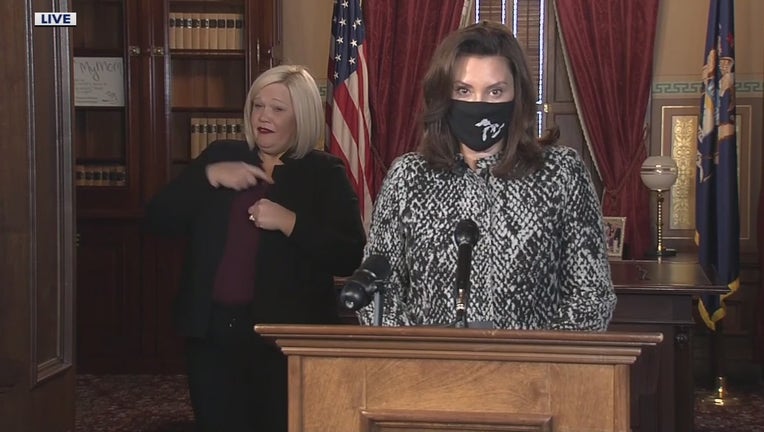 SOUTHFIELD, Mich. (FOX 2) - Michigan Governor Gretchen Whitmer said Friday she doesn't understand why the federal government is standing in the way of the distribution of Pfizer's coronavirus vaccine and is blaming the Trump administration for the problems over the past week.

During her Friday press conference, where she announced a new epidemic order that allows casinos, movie theaters, bowling alleys, and in-person learning at high schools to reopen and resume, Whitmer said Pfizer's vaccines are ready to be shipped but are waiting for the federal government.

"I cannot get a straight answer from the Trump administration about why Michigan, like many other states, is receiving a fraction of the vaccines that we were slated to receive," Whitmer said. "There are millions of Pfizer vaccines that are waiting to be shipped but feds are slow-walking the process of getting addresses to Pfizer for some reason that I cannot get an answer to."

Additionally, she said hospitals and nursing homes are ready to give out the vaccine but the bottleneck appears to be at the White House and has tried to get answers from President Donald Trump's administration, including Health Secretary Alex Azar.

She said her calls have not been returned.

Michigan was among several states who said they have been told to expect far fewer doses of the Pfizer vaccine in its second week of distribution. That's leading to worries about potential delays in shots for health care workers and long-term care residents. But senior Trump administration officials on Thursday downplayed the risk of delays.

Two officials who spoke to The Associated Press on condition of anonymity are citing a confusion over semantics.

Pfizer said its production levels have not changed.

Michigan was promised 84,000 doses of the Pfizer vaccine next week but according to the Detroit News, health officials said they would get 60,000 doses instead.

The U.S. Department of Health and Human Services told the Detroit News that reports that the allocations being reduced was incorrect and that jurisdictions will get vaccines at different sites over several days.

Whitmer, who said multiple times she was angry, wondered what would be different if there was a different administration.

"Imagine having a White House that was leveling barriers and getting these vaccines into the nursing homes and hospitals. If everyone was simply on the same page, how many businesses would be saved? How many lives would be spared? How many jobs would be maintained?" she wondered.

While Whitmer blamed the Trump administration, she said Michiganders did their part to bring down the state's 7-day average, which protected our hospitals from being overwhelmed. She commended residents for staying home and helping the state avoid the dreaded Thanksgiving travel spike.