Michigan Governor Whitmer speaks 1-on-1 about abortion, COVID policies, and electric vehicle evolution with Election Day on the horizon Nov. 8. In the third segment, Oakland County Clerk Lisa Brown explains when we might know election results.

DETROIT (FOX 2) - On Nov. 8, 2022, Michigan voters will head to the polls to decide on who will be governor for the next four years: Democratic incumbent Gretchen Whitmer or Republican challenger Tudor Dixon.

The two debates are over and with Election Day nearly here, we invited both to appear on special editions of Let it Rip. Dixon took us up on the opportunity a week ago and Whitmer did the same.

This week, Governor Whitmer gave us a little more than 15 minutes to talk about the same topics that Dixon spoke about last week.

Whitmer on abortion: important for woman and family to decide

The issue of abortion was always going to be a topic after the Supreme Court overturned Roe v. Wade. During the second governor's debate a few weeks ago, Whitmer and Dixon sparred on abortion. Now, Whitmer says that Proposal 3 has necessary language in it to help women who lose a baby in the last few weeks.

"What we know is that Roe v. Wade has restrictions based on viability. That's exactly what (Ballot Proposal 3) does. Very rarely there's an extenuating circumstance where a woman is pregnant with a desperately wanted baby. They've decorated a  nursery they've picked out names but for some reason at the end of the pregnancy, it is fatal for the baby - the baby is not going to survive. It requires surgical removal of a baby that is not viable. That happens in the very, very rare circumstance but often at the end of a pregnancy. That's why it's important for that woman and her family and doctor to be able to have the tools necessary to remove a fetus that's not viable, even if it's that late," Whitmer said.

The governor pointed out that there are not a lot of late-term procedures happening and that the idea that an abortion at that stage would kill an otherwise healthy baby is being used to inflame and drive fear into the mind of people.

Ultimately, abortion is up to voters on November 8 on proposal 3.

"All of this fear-mongering is to defeat a ballot initiative as opposed to really educate the public. I fear that it's dangerous and I think that it's important that everyone get the facts," Whitmer said. 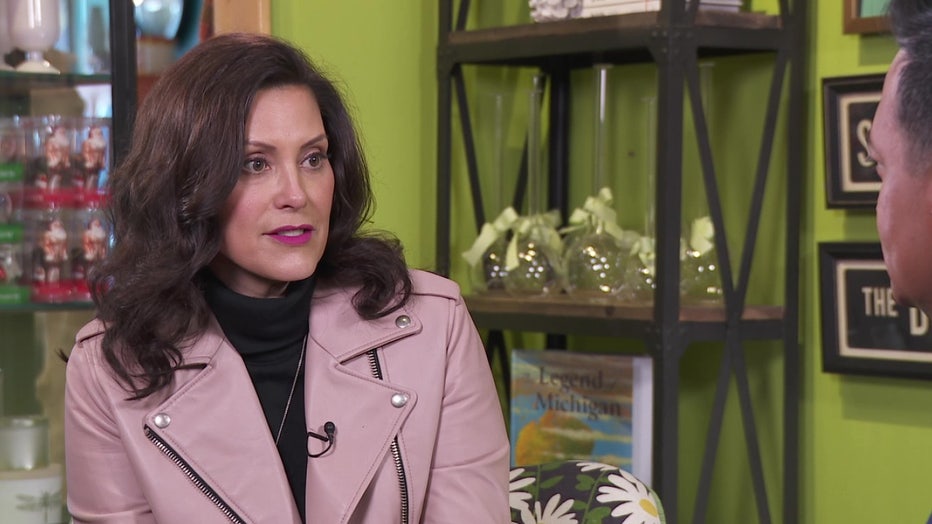 Whitmer says thousands more would have died from COVID under Dixon

During her four years as Governor, Whitmer has battled through the COVID-19 pandemic for more than half of her time as the leader of the state. She's been hit many times about policies regarding schools and Republicans have claimed that she forced nursing homes to take COVID-19 patients, something she says was not true.

"I think it's important to correct the record. My opponent continues to tell people that nursing homes were forced to take COVID patients. They were not. They never were," she said.

Whitmer says her policies were audited many times by the Republican-appointed Office of Auditor General and AARP, among others, but it's been proven false.

"My opponent knows that this gets people unhappy and distracts people from her dangerous plans and that's why she continues to promulgate this," Whitmer said.

The governor did acknowledge that some nursing homes took COVID-positive patients in at their own choosing but it was never required by the state.

"If that was the case, there were strict regulations to try to separate and keep them from infecting other nursing home residents. that was never something that was required by the state," she said.

Whitmer says Michigan must lead in the evolution of EV

After Chinese battery maker Gotion agreed to spend over $2 billion in Big Rapids, some Michigan residents have said they feel forced to buy electric cars, believing that the plant is being subsidized and being given grants for an experiment.

"I think that is just absolutely unfounded crazy talk, to be honest. We are in a global competition. We either win this decade or we're left behind for a generation. This Gotion investment in Big Rapids, the people of Mecosta County are so thrilled about it - from the barbers to the superintendent to the leadership at Ferris University - this is going to be a huge opportunity,"

Whitmer says this will help the state of Michigan lead in batteries and advancements but will also bring an influx of high-paying jobs to the county.

"I know that my opponent doesn't believe in any economic incentives, that would be a huge setback for Michigan. It means General Motors' $7 billion investment in batteries would not happen if she had been governor because she doesn't support any economic development. She wants to unilaterally disarm, I want to make sure we're winning," Whitmer said.

The governor says there are built-in expectations and measurements to make sure companies uphold their end of the bargain to get their tax-payer incentives.

During our interview with the Governor, we discussed election integrity - which she says she was grateful to hear Dixon say she recognized Joe Biden as the President - the gas tax - which the governor has decided not to pause because it didn't go into effect until 2023 - and more.

Whitmer answers all of those questions Thursday during a special Let it Rip at 6:30 p.m.