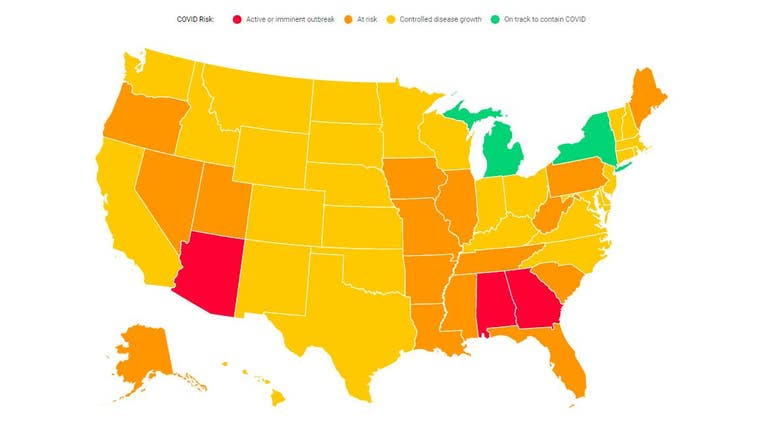 (FOX 2) - A volunteer group that's been modeling COVID-19 data in the United States says Michigan is one of only two states on track to contain the spread of the coronavirus.

The group is called COVID Act Now, and their website says they're a team of technologists, epidemiologists, health experts and public policy leaders working in partnership with several universities.

The group tweeted on Tuesday that they've moved Michigan into the states that are "on track to contain COVID."

"Cases are steadily decreasing and Michigan's COVID preparedness meet or exceed international standards across our key metrics," the tweet reads.

COVID Act Now says this has happened because Michigan has significantly increased the amount of contact tracers and the infection rate has dropped to 0.85, meaning each person is infecting less than one other person. Gov. Whitmer talked about this data as well on Wednesday during her COVID-19 press briefing, the first one she'd called in nearly two weeks.

"Before the public health measures in place, the average Michigander spread the virus to three other people. As measures were implemented and adherence grew Michigan's infection rate decreased to 2.5 people and then 1.25 people and then 0.8. Throughout April, a person with COVID-19 infected an average of less than one person, which allowed our curve to fall and saved a lot of lives," she said.

"Our action is working. Michigan is standing out as having done well in terms of pushing our curve down," she continued.

COVID Act Now says the majority of other states are in "yellow," or a controlled disease growth. Fifteen states are in "orange" or at-risk, and three are in "red" meaning there is an active or imminent outbreak. Those states are Arizona, Georgia and Alabama.

Michigan's medical director Dr. Joneigh Khaldun said Wednesday during Gov. Whitmer's COVID-19 briefing that on average, 14,000 tests are being conducted each day across the state. She also said the current average percent positivity is at about 2.2%, which she said was about half of what it was last week.

As of Tuesday's data, Michigan has confirmed 60,189 cases overall and has linked 5,790 deaths to the virus.

"We know that our efforts are working here in Michigan. We have built up our store of PPE, we have seen declining cases as well as declining deaths, we have ramped up our testing and tracing capacities and because of that we're able to keep moving forward. And that is a tribute to the vast majority of people in this state who have taken it seriously and done their part," Gov. Whitmer said.

Gov. Whitmer also announced on Wednesday that schools will be able to resume in-person learning under Phase 4, which means that if everything remains on track all of the state will be able to do so in the fall. Six of Michigan's eight regions are in Phase 4 of the MI Safe Start plan right now and the other two have already advanced to Phase 5.

READ MORE: When can Michigan enter Phase 5, and what it will include