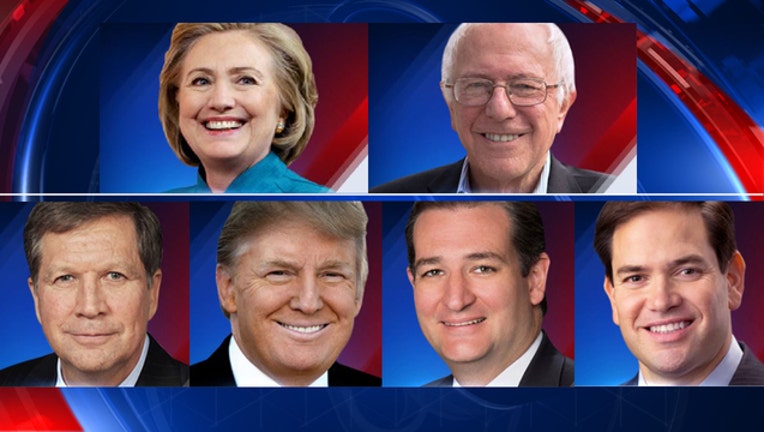 LANSING, Mich. (AP) - Republican front-runner Donald Trump faces a test of his durability with white, working-class voters in Michigan, the first industrial state to vote in the 2016 primaries and the biggest prize among four states casting ballots Tuesday in the turbulent GOP race.

Squeezed between high-profile Super Tuesday and high-stakes primaries next week in Florida and Ohio, Tuesday's contests are unlikely to dramatically reshape either party's primaries. But with 150 Republican and 179 Democratic delegates at stake, the races offer an opportunity for front-runners to pad leads and rivals to catch up.

While Trump has stunned Republicans with his broad appeal, he's forged a particularly strong connection with blue-collar white voters. With an eye on the general election, he's argued he could put Midwestern, Democratic-leaning industrial states such as Michigan and Wisconsin in play for Republicans.

Trump is facing competition from Ohio Gov. John Kasich, who has failed to win a single primary so far but hopes Michigan can give him a boost heading into his home state's winner-take-all contest on March 15.

"It's not just the whole country that's watching Michigan - now the world's beginning to watch," Kasich said Monday during a campaign stop in the state. "You can help me send a message about positive, about vision, about hope, about putting us together."

Unless Kasich and Florida Sen. Marco Rubio can win in their home states next week, the GOP primary is set to become a two-person race between Trump and Ted Cruz. The Texas senator is sticking close to Trump in the delegate count and with six states in his win column, he's arguing he's the only candidate standing between the brash billionaire and the GOP nomination.

During a stop at a catfish restaurant on Monday in Mississippi, Cruz said the current vacancy on the Supreme Court means Republicans can't take a chance on Trump.

Rubio sought a boost in Tuesday's contests from Mitt Romney, the 2012 GOP nominee. Romney has recently become an outspoken critic of Trump and recorded a phone call on Rubio's behalf in which he warns Republicans that if the real estate mogul wins the nomination, "the prospects for a safe and prosperous future would be greatly diminished."

Romney has not endorsed a candidate in the GOP primary, but clearly says in the phone recording that he's speaking on behalf of the Rubio campaign. A Romney spokeswoman said the former Massachusetts governor has offered to help Rubio, Kasich and Cruz in any way he can.

Some more mainstream Republicans have cast both Trump and Cruz as unelectable in a November face-off with the Democratic nominee. But they're quickly running out of easy options to stop their momentum, and are increasingly weighing long-shot ideas such as a contested convention or a rallying around a yet-to-be-determined third-party candidate.

Clinton, meanwhile, appears to be on a steady path to the Democratic nomination. She's steadily grown her lead over Sanders, who has struggled to broaden his appeal beyond a loyal following of younger voters and liberals.

Trying to make a stand in Michigan, Sanders has accused Clinton of being disingenuous when she asserted that he opposed the auto bailout that rescued carmakers General Motors and Chrysler during the Great Recession. The bailout of the U.S. auto industry by presidents George W. Bush and Barack Obama remains popular in Michigan, the home of the U.S. auto industry, and has been credited with preserving the Midwest's manufacturing base.

"Secretary Clinton went out of her way to mischaracterize my history as it relates to the 2008 auto industry bailout," Sanders said during a rally in Kalamazoo, Michigan. "Let me be as clear as I can: There was one vote in the United States Senate on whether or not to support the auto bailout and protect jobs in Michigan and around this country. I voted for the auto bailout."

Sanders and Clinton both voted in favor of a bailout bill in 2008, but it failed to clear the Senate, prompting Bush to announce about a week later that the federal government would step in with $17.4 billion in federal aid to help the carmakers survive and restructure. The last $4 billion was contingent on the release of the second installment of the Wall Street bailout funds.

Sanders did vote for a 2009 motion to block the release of those funds, though the measure was defeated by 45 Democrats, including Clinton, and a handful of Republicans.

Heading into Tuesday's contests, Clinton had accumulated 1,130 delegates and Sanders 499, including superdelegates. Democrats need 2,383 delegates to win the nomination.

Among Republicans, Trump leads with 384 delegates, followed by Cruz with 300, Rubio with 151 delegates and Kasich with 37. Winning the GOP nomination requires 1,237 delegates.