LANSING, Mich. - Voting is underway in Michigan's presidential primary more than a year after the option was greatly expanded through the passage of a ballot measure, though many Democrats vying for the nomination remain focused - for now - on Iowa and other early states.

The 45-day window to cast absentee ballots began Saturday. And unlike in the past, people can vote early for any reason.

It is expected to lead to what the secretary of state's office called a "significant increase" in early voting, which already was on the rise before voters approved the 2018 constitutional amendment that allowed no-excuse absentee ballots.

Absentee ballots accounted for 18%, or 462,000, of the 2.5 million votes cast in Michigan's 2016 primaries won by now-President Donald Trump and Vermont Sen. Bernie Sanders and more than a quarter, or 1.1 million, of the votes in the 2018 gubernatorial election. In local elections held on three days in 2019, the percentage of the overall vote share from absentee voting rose by between 4 and 15 points from 2017. 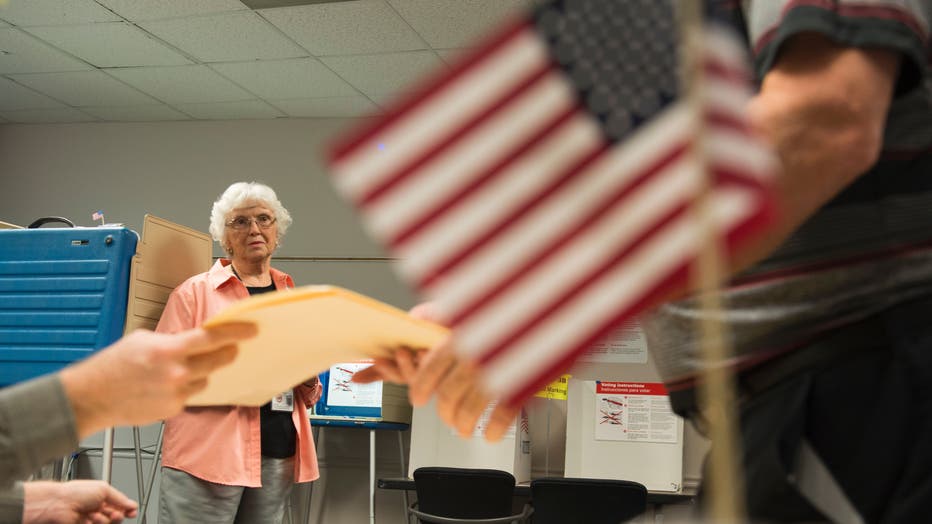 An election official watches as a man takes a ballot at an in-person absentee voting station in Fairfax, Virginia on October 12, 2016. / AFP / Andrew CABALLERO-REYNOLDS (Photo credit should read ANDREW CABALLERO-REYNOLDS/AFP via Getty Images)

The advent of no-reason absentee voting means the dozen remaining Democratic candidates "need to be engaging with their coalition earlier," said Patrick Schuh, state director for the liberal group America Votes. The outcome in the traditional first four voting states in February and the March 3 Super Tuesday primaries, he said, "will have potentially less impact on vote choice for voters here because they will have already voted."

At this stage, though, Michigan's primary has been mostly quiet since Democrats held debates in Detroit last summer, other than an ongoing barrage of TV ads aired by billionaire businessman Michael Bloomberg. He is skipping Iowa, New Hampshire, Nevada and South Carolina to focus on other states including Michigan, where his ad blitz has cost roughly $7 million, according to the Michigan Campaign Finance Network.

Bloomberg and Massachusetts Sen. Elizabeth Warren are the only two candidates with campaign offices in the state, both in Detroit. Warren was the first to hire a state director. Bloomberg was the last candidate to visit Michigan, on Dec. 21, and now has 60 staff on the ground.

A Bloomberg campaign official said it is sending mail and launching another voter-contact program focused on seniors, adding that it has been regularly calling senior voters and organizing senior-focused events. Other contenders include Sanders, former Vice President Joe Biden, Pete Buttigieg, the former mayor of South Bend, Indiana, and Sen. Amy Klobuchar of Minnesota.

A Buttigieg spokesperson said campaign volunteers are talking through the early-voting process with supporters. Sanders' campaign said its volunteers have held nearly 700 events across the state. Klobuchar's campaign said it plans to continue ramping up operations here. Biden supporters will launch organizing kickoffs in Detroit and Ann Arbor on Tuesday, and Detroit Mayor Mike Duggan will host a phone bank for the Biden campaign on Friday.

Michigan, with 125 pledged delegates at stake - the ninth-most overall - will hold one of the most significant contests after the March 3 Super Tuesday slate and will be a crucial battleground in November.

Campaign activity is expected to intensify as March 10 approaches, volunteers get more involved and paid staffers start arriving from states where voting is done. But some political observers are a bit surprised by how muted it has been so far given the expansion of early voting, outside of some contenders recently starting to announce in-state endorsements.

"None of these campaigns seem to be spending on any mail or digital or anything like that - at least not to the level that you would expect given the thousands and thousands of people who are going to be casting ballots in a few days," said Josh Pugh, Michigan spokesman for For Our Future. The primarily labor-financed group is not endorsing in the primary but is focused on mobilizing potential Democratic voters to defeat Trump. It knocked on more than 250,000 doors last year.

The ballot initiative also allows citizens to register by mail closer to Election Day - 15 days or more out - and in person at any time, including on Election Day - which could impact the primary. People previously had to register at least 30 days before an election.

The Washington-based Voter Participation Center and the Center for Voter Information, which work to boost turnout among underrepresented groups, are mailing 400,000 voter registration applications to Michigan residents this month.

Republicans, meanwhile, are working to re-elect Trump in the fall. He campaigned in Battle Creek last month. Two GOP challengers, former Massachusetts Gov. William Weld and ex-Illinois Rep. Joe Walsh, are listed on the ballot but are long shots.