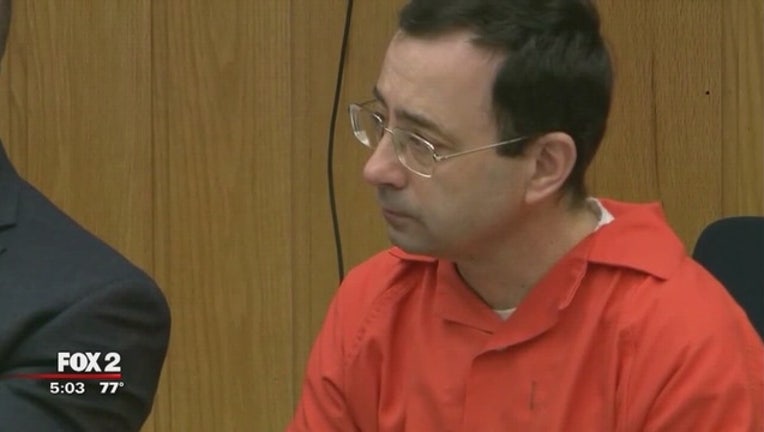 LANSING, Mich. (AP) - The Michigan House on Tuesday scaled back legislation inspired by the Larry Nassar sexual assault scandal, dropping certain measures addressed by last week's $500 million settlement between Michigan State University and hundreds of Nassar's victims and revising the time limits that survivors of childhood abuse would have to sue.

The House package, which was poised for committee and floor votes later in the week, would give people abused as children until their 28th birthday to sue, instead of their 19th birthday, which is generally the current cutoff. They could file lawsuits beyond their 28th birthday as long as they did so within three years of discovering they had been abused. The state Senate had proposed giving such victims until their 48th birthday.

Critics contend Michigan's current limits are inadequate because survivors often wait to report abuse due to fear or because they repressed it.

The 28-bill package also would give those abused as adults 10 years to sue, instead of the current three-year time limit that is generally used.

In another key change, the House Law and Justice Committee backed away from adding college employees, youth sports coaches, trainers and volunteers to the state's list of people who must report suspected abuse or neglect to child protective services.

The panel also shrunk a proposed window for people abused as children in 1997 or later to retroactively file lawsuits, shortening it from one year to within 90 days of the law taking effect. The retroactivity would only apply, however, if the accused was convicted of first-degree criminal sexual conduct and admitted to using his or her position as a physician to coerce the victim or to provide unethical or unacceptable treatment, which would limit the ability of non-Nassar victims to sue.

The state Senate-passed legislation - which was backed by Nassar survivors and flew through the chamber in days - had received pushback from universities, schools, local governments, businesses and the Catholic Church over the broader financial implications of facing an unknown number of suits for old allegations.

Rep. Stephanie Chang of Detroit, the ranking Democrat on the committee, noted that people abused as minors could prospectively sue within three years of learning of injuries caused by the abuse.

"We're coming in line with numerous other states that already have a similar provision," she said. "We know that for survivors it can take years to grapple with the pain and trauma."

Asked why not let non-Nassar victims sue retroactively, Chang said the bill is "a bipartisan compromise that really does try to balance as best as possible the need for access, accuracy, fairness and justice in our legal system."

The Michigan Association of State Universities issued a statement commending the committee for a "very thoughtful and deliberative process," one that CEO Daniel Hurley said "will better protect" people in Michigan from sexual assault.

The committee chairman, Republican Rep. Klint Kesto of Oakland County's Commerce Township, said expanding the list further to coaches and others "would have cost tons of money to the state, to the taxpayers" and added that mandatory reporters typically are "people of a professional capacity." Chang said it could have led to a flood of new reports but less attention on abused children who "really, really need the help."

Under last week's $500 million settlement with Michigan State University - where Nassar worked for decades as a campus sports doctor and assaulted gymnasts and others under the guise of treatment - the 332 victims were required to withdraw their support for two Senate bills that would have stripped an immunity defense in sexual misconduct civil cases if public entities are negligent and waived minors from legal notice requirements in such lawsuits.

MSU to payout Nassar survivors based on seriousness, length of abuse

Robert Young, who helped to negotiate the deal and this week was named Michigan State's general counsel, said last week that the "agreement was that our governmental immunity and (notice of intent) defenses would be preserved so that we didn't settle for half a billion dollars only to have another set of cases just like it."