In a survey of 600 Michigan residents, respondents disapproved of Trump's handling of the COVID-19 pandemic 44%-50%, while approving of Whitmer's actions 57%-37%. The polling was conducted between April 15-16.

In a battleground state during an election year when the governor's decisions are made under a microscope being watched by a national audience, many believe how the state and country respond to the COVID-19 outbreak will have lasting implications on how voters pick their candidate come November.

Whitmer and Trump have been at odds in recent weeks over the proper response to COVID-19. In Trump's most recent attack on the state's response, he tweeted "LIBERATE MICHIGAN" on Friday, a reaction to Whitmer's restrictive stay at home order she extended weeks before. It was the latest in a series of criticisms the governor has faced from public officials and residents upset their constitutional rights were being eroded.

Much of the frustration is rooted in the uncertainty over when the state should reopen its economy - a question that other public leaders are pondering as social distancing appears to be slowing the spread of the virus. What is certain is the economic toll the pandemic is having on residents is already showing. 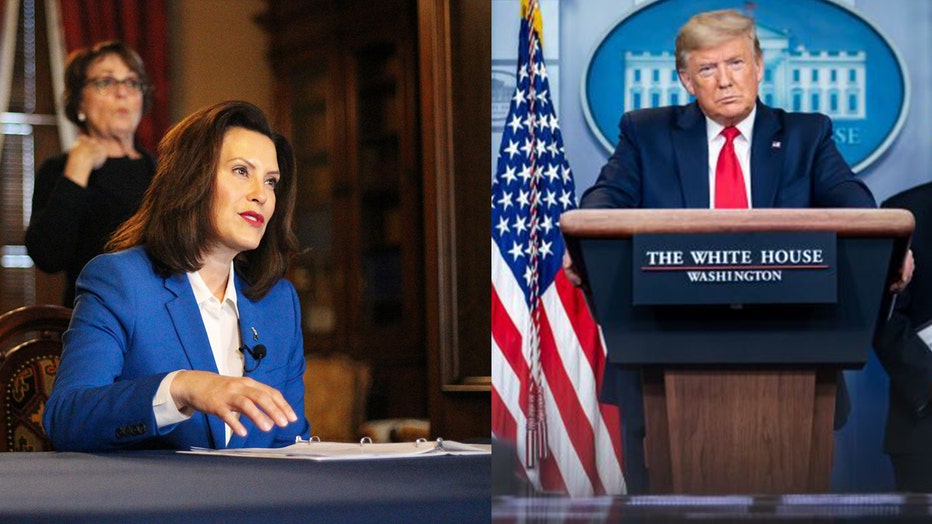 In the same chamber survey, 29% of respondents had been furloughed, laid off, or were unable to work. That number rises to 42.6% when accounting for those that were already working before COVID-19.

“This poll puts the level of economic struggle across the state in stark relief. Poll results report 29% of respondents furloughed, laid off, or unable to work. This points to the real possibility for the official unemployment rate for April to exceed our bleakest expectations,” said Sandy K. Baruah, president and CEO of the Chamber in a statement. “The dual-threat of navigating our greatest public health crisis coupled with our greatest economic crisis has placed a hereto unknown strain on Michigan families.”

One of the most vivid examples of how Michigan's workforce has responded to the wave of layoffs is the number of workers filing for unemployment. Rising at an unprecedented rate, more than a million people have applied for benefits. However, due to glitches and an inability to match capacity, a large chunk of those applications haven't gone through.

Among the surveyed residents who are no longer working, less than half had had success in acquiring benefits. Almost 40% have been unsuccessful.

A lack of income is beginning to reflect the grim predictions for families. Among those surveyed, 47% said the COVID-19 shutdowns were having a catastrophic or major impact on finances. Additionally, more than half of furloughed or laid-off respondents worried about putting food on the table.

“What we attempted to do with this survey was to paint a vivid picture showing the magnitude of what the people of Michigan face. That 28% of Michiganders worry that they can put food on the table highlights the unprecedented magnitude of the crisis residents face," said Richard Czuba, the founder of Glengariff Group Inc which conducted the survey.

As for when the state will be back to normal, it's anyone's guess. Michiganders are split on when they think things will recover.

The entire survey can be found at www.detroitchamber.com/MICovidPoll/​​​​​​​