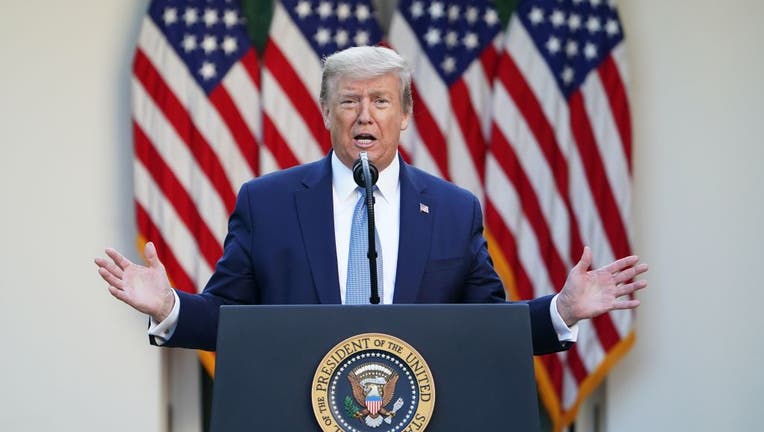 President Donald Trump tweeted "LIBERATE MICHIGAN!" on Friday morning, the day after Michigan passed 2,000 total coronavirus-related deaths and the day it will likely pass a total of 30,000 total cases.

Michigan was one of three states called out by the President in his series of 'liberating' states. Minnesota and Virginia were the two others mentioned.

In Minnesota, protesters are using the 'Liberate Minnesota' in the state capital of St. Paul to protest their state's stay-home orders.

Michigan has been under a Stay  Home order since March 23 and it's currently in place until the end of April. The state is also under social distancing guidelines from the CDC, which the President's administration has also advocated for the country to continue through the end of the month.

Earlier in the day on Friday, Michigan Governor Gretchen said she hopes for 'some relaxing' of her restrictions on May 1 but did not go into further detail.

“People are feeling very anxious. People are worried about the businesses they built -- took a lifetime to build -- and the employees that rely on them. The most important thing that anyone with a platform can do is to use that platform to tell people we’re going to get through this," she said.

Following Whitmer's extended executive order that placed further restrictions on where people can go and how businesses can operate, pressure from residents and Republican legislators from the state and federal level began to ramp up as more felt the governor had overstepped her boundaries.

Whitmer said earlier in the day she hopes to relax some of her guidelines by the start of May.

"I do hope to have some relaxing come May 1, but it's two weeks away and the information and the data and our ability to test is changing so rapidly, it's hard to tell you precisely where we'll bein a week from now, much less two," she said.

That frustration boiled over Wednesday when an estimated 3,000 protesters jammed up Lansing, and a few hundred congregated on the capitol lawn.

Whitmer responded in a news conference later that day arguing individuals that got out of the car were why the order was in place, later warning she may need to further extend the state's restrictions.

Michigan's governor has found herself in the spotlight more and more over the past few weeks, trading barbs with President Donald Trump, contending with GOP lawmakers over when her order should be extended and even making presumptive Democratic presidential nominee Joe Biden's shortlist for vice president.

Whitmer's stay-at-home order will end at the end of April - the same time her executive powers run out. It's unclear what will happen beyond that time.