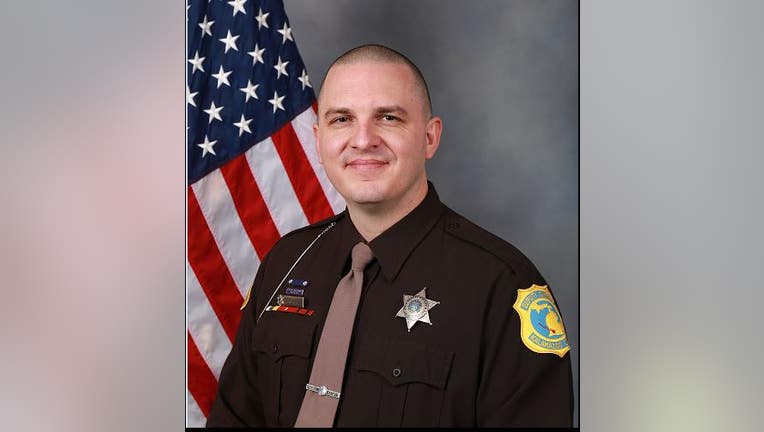 GALESBURG, Mich. - A deputy in Michigan died after being wounded in a chase that ended with the death of a suspected gunman, a sheriff’s office said.

Deputy Ryan Proxmire died Sunday, the Kalamazoo County Sheriff’s Office said in a statement. He had been in critical condition at a hospital since being shot during the chase.

Deputies had encountered the suspect Saturday evening at a gas station in Galesburg after he was reportedly involved in a chase earlier in the day with a neighboring law enforcement agency.

The suspect allegedly pointed a gun at the deputies, got into a vehicle and drove away. A chase ensued. During the chase, the sheriff’s office said the suspect opened fire, wounding Proxmire and causing his cruiser to go off the road.

The sheriff’s office said the suspect later lost control and drove off the road into a field. He is accused of getting out and firing shots. Other deputies returned fire, killing him.

The suspect’s name has not been released by authorities.

"It is with a heavy heart and deep regret that we announce Deputy Ryan Proxmire has succumb to his injuries," read a post from the Kalamazoo County Sheriff's Office Sunday. "Please keep Dep. Proxmire, his family and his law enforcement family in your thoughts as we begin to grieve this tragic loss.

Proxmire was assigned to the sheriff’s office road patrol team but had also worked in the jail and instructed other deputies in field training, Taser use and tactics for control and defense.

The sheriff’s office said additional information would be announced as soon as it knew more. A news conference was being scheduled for Monday.