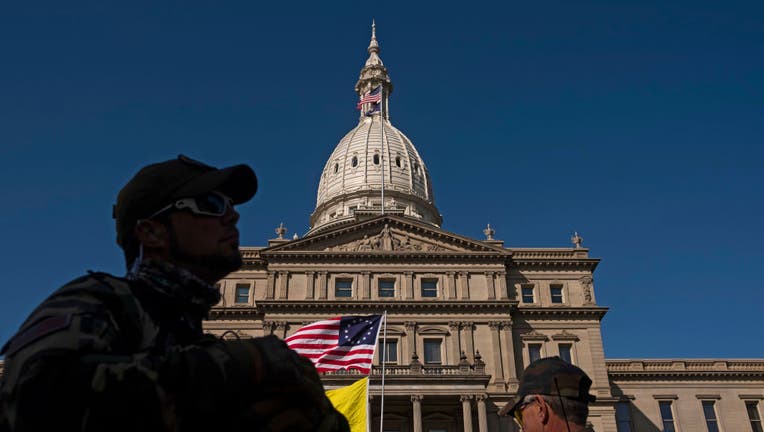 LANSING, Mich. - The Michigan State Capitol Commission has voted to ban the open carry of firearms within its facility in Lansing, rendering an end to a subject that embroiled much of Michigan's capital since protests swarmed the city in 2020.

By a unanimous vote during a Monday meeting, a group of six commissioners banned the open carry of weapons.

The normally unassuming gathering of individuals found themselves at the heart of a gun debate and the larger topic of personal freedoms last year when several men armed with large guns entered the capitol and could be seen from the balcony over where lawmakers were sitting at the time.

An uproar over the practice placed the MSCC in the middle of warring sides at a moment of intense political division during the beginning of the pandemic.

In September, the commission failed to pass a motion that would ban the open carry of weapons by a 3-3 vote.

However, the tone of the argument has shifted dramatically over the last few days after several hundred protesters stormed the U.S. Capitol, many of them armed and prepared for violence.

The Michigan State Capitol Commission, which regulates security at the Michigan Capitol will vote on restricting access to the building to those who are carrying firearms that aren't concealed.

"No lawmaker, reporter, staff member, or anyone who works in the Michigan Capitol should fear for their safety at work. But in the past year, we have seen a rapid rise in violent rhetoric and threats to public safety that require our immediate action," read a statement from Gov. Gretchen Whitmer.  "In April of 2020, armed protestors stormed the Michigan Capitol and stood in the gallery, long guns in hand, looking to intimidate legislators doing their job to serve the people of Michigan. And last week, we saw an armed insurgency occur in our nation’s capitol. This cannot stand. We must take immediate action to protect everyone who steps foot in our state Capitol."

The public outcry for changing policy on open carry has grown ever since. Some, like Whitmer, have even linked parallels between the armed protest in Michigan last spring to the riot last Wednesday.

"We are an outlier in Michigan in allowing weapons in our Capitol and permitting political intimidation and domestic terrorist into our Capitol armed with weapons," said the Michigan House Democratic Leader Christine Greig.

Instead of stopping gun carriers outside the state House and Senate offices, Michigan State Police will monitor the entrances of the building and screen people before going in.

Groups like the NRA and other pro-gun lobbies are expected to challenge the rule in court.