ANN ARBOR, Mich. - The future of fashion is plastic, 16 bottles at a time.

That's the business model for Jackson Riegler, who has cultivated a t-shirt brand that uses plastic waste discarded in the Great Lakes, breaks it down and rebuilds it into short and long-sleeved t-shirts. What began as a passion for improved water quality in his childhood backyard has grown to a brand built on tackling pollution from multiple sides.

And business has been booming.

"I never thought it would be growing to this point. It's so mission-driven and was at such a basic level when I started it out," Riegler said. "It was more of a project than anything else. Two years ago, I would never have thought this is something I would have as a career. But the past six months have changed it into a viable option for a career."

In its earlier days, Riegler's company Oshki localized its operations to Muskegon, Michigan - the business's home base. Only a 17 years old high school junior at the time, he was shipping 50-75 shirts every order. The retailer made use of local screen printers that purchased t-shirts from China and came as blank canvasses. Logos and graphics would be printed on the t-shirts before being mailed out. 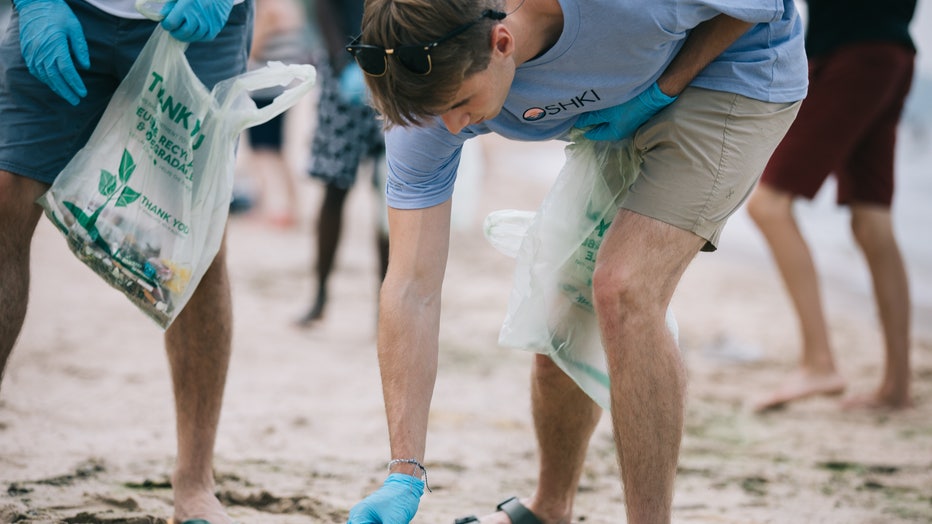 Then in July 2019, Riegler, who is now enrolled at the University of Michigan, took advantage of funding from the school and knowledge he learned in a class to revamp his operations. Along with news coverage, a newly-launched supply chain, and website, the number of t-shirts Riegler is ordering now eclipses 300 items every month.

"People ask me 'what is my motivation for producing 100 percent in the U.S,'" Riegler said. "In a class called Business and the Environment, we focused on a circular economy, on having a sustainable supply chain. If 99 percent of your customers are in the U.S., the best thing for the environment and the economy overall is for me to produce 100 percent in the U.S.."

A U of M student is turning plastic waste into tshirts

When discussing the business of recycling plastic in the U.S., a key player to mention is China, especially in the story of Oshki.

Around the same time Riegler founded his company, China said it would stop purchasing plastic from the United States. One of the country's largest buyers of plastic waste, Riegler estimates his t-shirts made from plastic would have cost $80-100 per piece. Now holding onto an abundance of recycling that typically ends up in landfills, he can sell his shirts for a fraction of the cost.

A lot of companies will ship their raw materials from all around the world just to be delivered to a customer in the U.S.. A global system like that creates an abundance of fossil fuel emissions in a process that isn't efficient, even if it may be cheaper. Oshki's business model relies on a system that doesn't leave the U.S. - from vinyl stickers produced in New York and packaging from Colorado to plastic recycling in North Carolina and t-shirt production from South Carolina. This supply chain reorganization was announced in July of 2019.

Footage of plastic being recycled at a plant in North Carolina

Footage courtesy of Unifi Manufacturing, Inc., the video shows the manufacturing process of how plastic is transformed into tiny plastic beads, which eventually become polyester yarn.

As the company has evolved, its mission of promoting a cleaner Great Lakes has remained the same. Oshki, which translates directly to "fresh" in Native American Ojibwe, commits part of its revenue to philanthropy.

"Five percent of the proceeds always go to nonprofits that work to preserve the Great Lakes," Riegler said. "I read somewhere it's not good to be stuck in one specific area in philanthropy efforts, so each month, I'll decide what is the most needed issue for Great Lakes preservation."

Count plastic pollution as a pervasive issue throughout the region's water bodies and the world, and one that is projected to only get worse. A study looking at cumulative plastic production in the world found by 2015, humankind had produced 8.3 billion metric tons of the stuff. Only 21 percent had been recycled or incinerated, leaving 79 percent to be discarded. By 2050, plastic production is expected to triple.

"Reusing plastic will be key in the next 30-40 years, in terms of preservation of environments," Riegler said. "It's damaging to our personal streams and we're continually eating more and more fish that have plastic in their stomachs.“

Currently, there is a 5:1 ratio of fish to plastic in the sea. Riegler says by 2050, that ratio will be 1:1. To bring awareness to that warning, he unveiled a t-shirt by the same name. It's made of 50 percent plastic and 50 percent cotton.

Some of the material being recycled is plastic that was picked up during beach cleanups along the Great Lakes. Riegler would like to incorporate more of these events into the plastic-recycling process, eventually creating his shirts exclusively from Great Lakes plastic.