Those that were granted funds after selecting one of those reasons received letters recently informing them that they'll need to resubmit claims for unemployment relief based on the new guidelines approved by the U.S. labor department.

LANSING, Mich. - Michigan's unemployment agency is telling some applicants that received COVID-19 relief they may have to re-certify their unemployment status because they selected eligibility requirements that weren't approved by the federal government.

The Unemployment Insurance Agency said it had included four reasons on the initial applications that were not approved by the U.S. Labor Department, according to a letter reviewed by FOX 2 sent to one claimant. 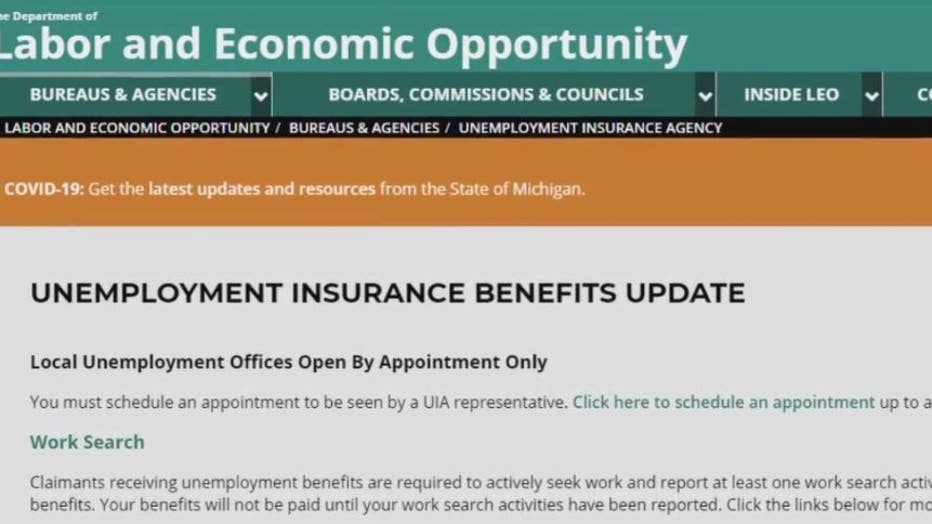 Those that were granted funds after selecting one of those reasons received letters recently informing them that they'll need to resubmit claims for unemployment relief based on the new guidelines approved by the U.S. labor department.

Those that resubmit claims and are determined to not be eligible for the Pandemic Unemployment Assistance may have to pay that money back.

The four reasons considered non-qualifying include:

The UIA has been the subject of criticisms throughout the pandemic due to website crashes and improperly paying people who were not eligible for relief.

"At the onset of COVID, there was ambiguity in the federal guidelines and more latitude in the interpretation of those guidelines by the states, including Michigan. As the program continued, USDOL became more prescriptive to states regarding what could and could not be included," read a statement from the agency.

Claimants who were notified that they must requalify for PUA should quickly submit their updated information so UIA can redetermine their eligibility and continue to provide benefits to workers whose jobs were affected by COVID-19. UIA is working on a plan to address any overpayments made to individuals who were not eligible to receive PUA benefits. The agency will evaluate each requalification on a case-by-case basis and we are currently reviewing a waiver process.

In the months since the PUA program began, the labor department has added new eligibility requirements that claimants may use.

RELATED: What it means now that Michigan's extended benefits have ended

Those that will need to resubmit claims must do so within 20 days of receiving the notice. They'll need to log onto the Michigan Web Account Manager and select the "requalify for PUA" link. Once the claim is processed, it will be reevaluated and the department will redetermine each applicant's eligibility.

Those that are eligible for benefits will be paid, the letter said. If someone is found not to be eligible, they can file an appeal. If the appeal isn't approved, the UIA says it will "evaluate the overpayment to determine if the overpayment should be waived."