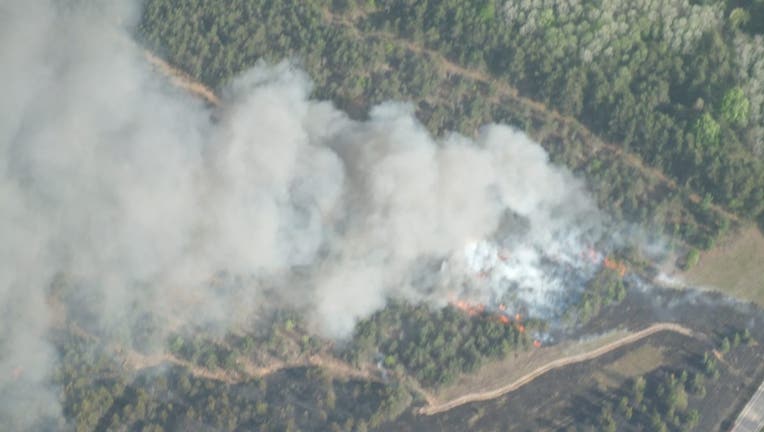 A fire in northern Michigan has burned 425 acres and forced evacuations of around 75 homes.  (Michigan Department of Natural Resources.)

WEXFORD CO. Mich. - The Michigan Department of Natural Resources says it has contained about 70% of a large fire in a northern county that's burned more than 420 acres of land.

Located in Wexford County, the fire was first reported late Tuesday afternoon, engulfing several square miles of land. It started in a scotch pine plantation and has burned trees on both private and public land.

It's unclear how the fire started.

A release from the DNR said the fire is about 21 miles southeast of Traverse City with about a perimeter around the fire measuring more than 5 miles.

As fire crews continued to get the blaze under control, about 75 homes have been evacuated as a result. Residents were allowed to return to their homes Tuesday night.

So far, no injuries or property damage has been reported.

Fire departments from more than a dozen agencies were assisting the DNR with the blaze.

A small amount of rain helped firefighters further contain the blaze Wednesday night. Aircraft have also dropped about 42,000 gallons of water and crews have constructed dozer lines that will help contain the fire.