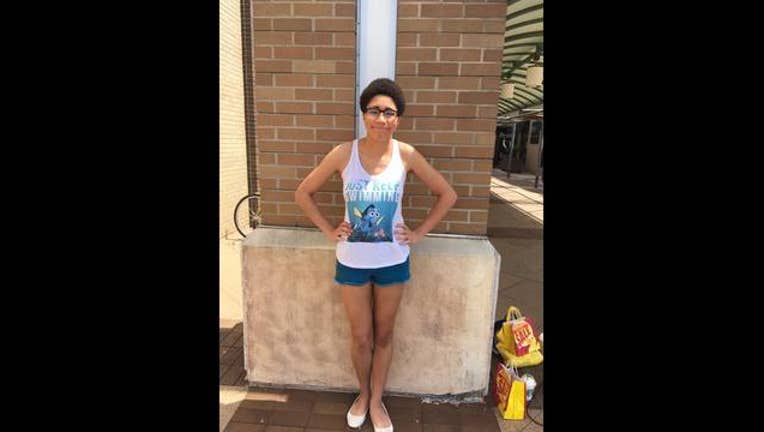 Hannah Pewee says she was told by mall security in Grand Rapids that she was dressed inappropriately and was asked to leave. She says she wasn't the only one wearing shorts and a tank top and says she was singled out. Image: Facebook

(WJBK) - A Michigan woman says security guards kicked her out of a Grand Rapids mall after they told her she was dressed inappropriately.

Hannah Pewee posted on Facebook over the weekend that she went to the Woodland Mall in standard summer gear: shorts and a tank top. She said that she was dressed for the 90 degree weather but was approached by mall security after someone complained about the way she was dressed.

Pewee said she wasn't the only one in the mall wearing shorts and a tank top but she was the only one who was told she was dressed inappropriately.

"Never mind that within a one foot radius there were plenty of girls dressed just like me, since it's NINETY degrees outside. I am so angry right now I'm shaking. I felt so embarrassed I almost cried. All because a stranger didn't like how I dressed."

She said that the mall and the anonymous complainer should be ashamed of themselves.

"It's my body, and it's hot outside! I'm not going to show up in jeans and a sweater, sorry. Don't like it? Look away! I was out having a fun time with my sister and next thing I know, I'm out on the street. Slut-shaming how girls are dressed is deplorable and outdated, and it needs to stop."

The Woodland Mall's office commented in Pewee's post and apologized for her experience.

"We apologize. We dropped the ball here. It definitely was never our intention to embarrass you. We're working internally to fix our process and training so that this doesn't happen to any other shoppers in the future, regardless of any complaints. Our team is dedicated to making a fun and safe place for everyone to shop. Let us know if you have a few minutes to talk and let's make sure we make this right!

Pewee posted an update that she had spoken with the mall who said they were going to revise their policy so it's clearer about what's acceptable and what is not. She said she was also told that security would be discussing how to handle situations like this.