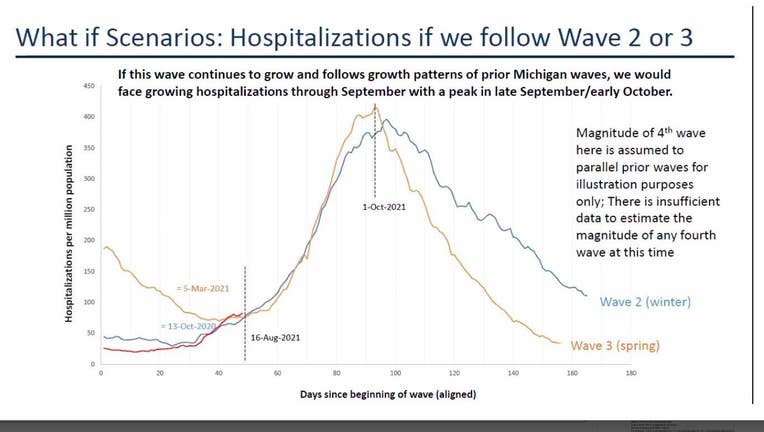 DETROIT - Michigan is heading toward a surge in COVID-19 cases expected to rival the fall and spring surges from the last year if it doesn't increase vaccinations and reduce social contact rates to their previous levels in April, new modeling shows.

With the southern U.S. states already getting hammered by the latest wave of infections, led by the Delta variant, health officials speaking Wednesday said Michigan was getting a peek into its future.

However, the state can also mitigate potential deaths and hospitalizations if it acts fast enough. "We can blunt that curve if we can increase vaccination rates to where we were in April," said State Epidemiologist Sarah Lyon-Callo.

COVID-19 cases are on the rise in Michigan, and the majority of cases are the delta variant.

Tremors of what could come were showing themselves in data presented to media during a Zoom call with officials Wednesday. The positivity rate for new infections increased to 7.7% while the case rate per million had risen 611% since its June 26 low point.

The state has also confirmed 856 cases of the Delta variant, which Lyon-Callo said the state determined was the primary driver behind Michigan's uptick in new cases. Meanwhile, the possibility of a maskless school year could spell big problems for children not old enough to get the vaccine but can still catch COVID-19. 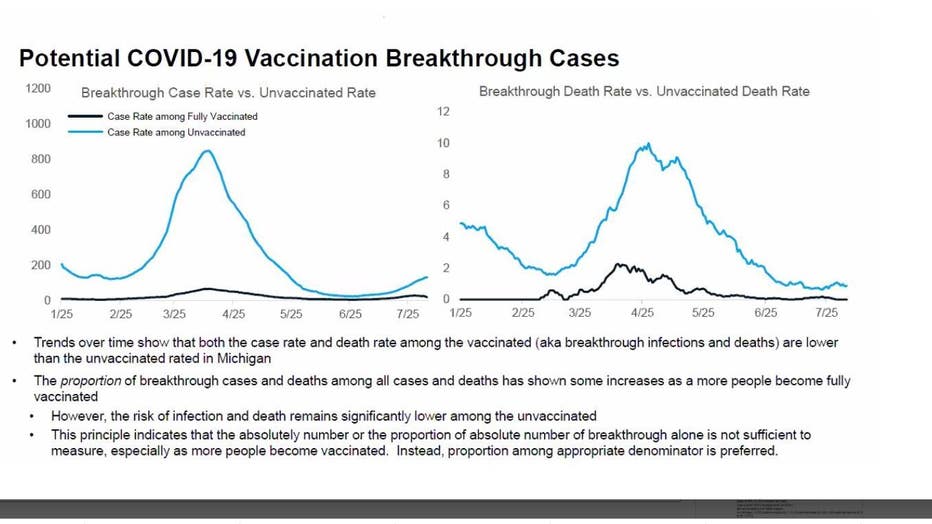 That's why Chief Medical Director Dr. Joneigh Khaldun said she had told Gov. Gretchen Whitmer if a mask mandate was in effect in schools, it would decrease the spread.

Here's what else was presented during the weekly meeting:

Most of the state has a high transmission level, according to the Centers for Disease Control and Prevention, with only Grand Rapids and Traverse City experiencing substantial transmission - a level lower.

Detroit also had the highest rate of daily cases for children under the age of 12 among the state's largest cities. About 47 cases being reported on average over the last seven days.

For the first time during the pandemic, Hispanic and non-Hispanic white residents reported the highest increase in new cases:

As of the week ending Aug. 12, there were 183 current or new coronavirus outbreaks being tracked by the state health department. It's a 36% increase from the previous week.

The Manufacturing and construction sector had the most number, followed by social gatherings and assisted living and child care settings:

The state says 2.1% of all emergency department visits were among people with COVID-19-like illnesses. Hospital admissions are also up for all age groups under 80 years.

MDHHS reported a 23% increase in hospitalizations and noted all regions except Region 7 (the northern lower peninsula) are seeing growing trends for admissions into the hospital for COVID-19. The number of patients in the hospital is highest in both Metro Detroit regions, as well as Regions 3 (the thumb and east Michigan) and 6 (west Michigan). However, the number is rising fastest in Regions 3, 6, and 8 (the Upper Peninsula).

The number of people in the ICU with COVID-19 has also gone up 15% since last week.

Currently, the death rate is 0.6 per million people.

For an 18-day period, Michigan actually saw more COVID-19 vaccines being administered than the week before, the longest sustained daily increase since vaccine rates were at their highest in April.

Are COVID-19 vaccines working in Michigan?

There's strong evidence to indicate that coronavirus vaccines have both reduced the number of people that could have been infected by COVID-19 and those that would have died from it.

But less than 1% of all COVID-19 cases came from fully vaccinated people, making up a tiny portion of all cases.

The state reported that 98% of new cases, 95% of hospitalizations, and 95% of deaths from COVID-19 were among unvaccinated people. 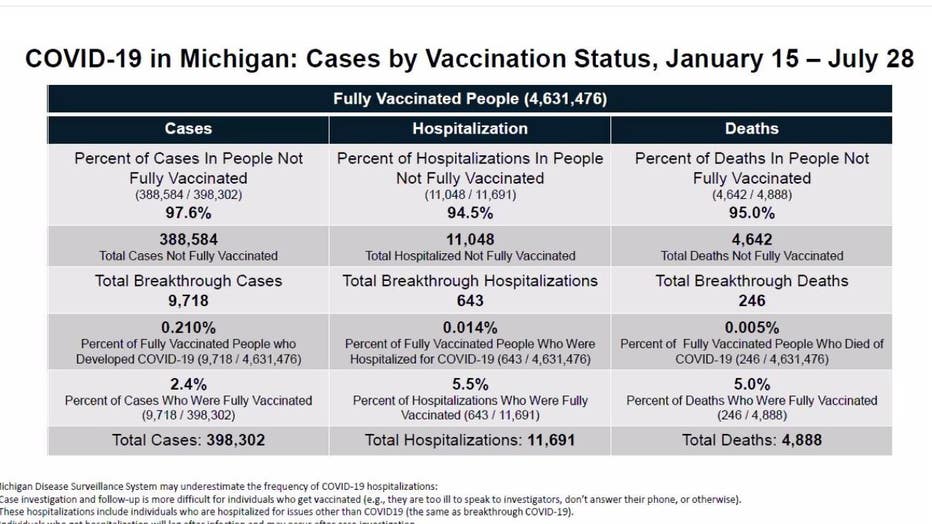 Additionally, the mRNA vaccines were shown to be 96% effective at preventing hospitalizations among elderly groups.

Vaccines are also showing to be far more effective at preventing reinfection in someone who previously caught COVID-19 over those that caught the virus but did not get the vaccine. A study out of Kentucky found unvaccinated people who had already been infected were 2.34 times more likely to be reinfected.

Delta has become the all-consuming variable capable of wrecking progress the state and the country made this year with vaccines.

The presence of more variables makes breakthrough cases more likely and could worsen health outcomes as vaccine effectiveness beings to wane after 6 to 8 months have passed since inoculation.

The Delta variant is primarily responsible for Michigan's latest uptick in cases and its hospitalizations, Lyon-Callo said. Currently ravaging the American South, it's expected to be the driver behind Michigan's next wave as well.

Delta is also expected to increase transmission between children as schools resume in August and September if proper mitigation tactics like mask-wearing and social distancing measures aren't used.

It's a mixture of people heading back indoors, Delta, and children in school that will define Michigan's next surge.

That's according to the school of public health at the University of Michigan, which expects to see COVID-19 cases and hospitalizations peak at the end of September or the beginning of October.

The upcoming surge is expected to mimic those of last spring and fall if COVID-19 vaccine rates and social contact behaviors remain at the level they are now. If cases do rise at the expected rate, then Michigan could see anywhere between 12,000 and 25,000 more hospitalizations. 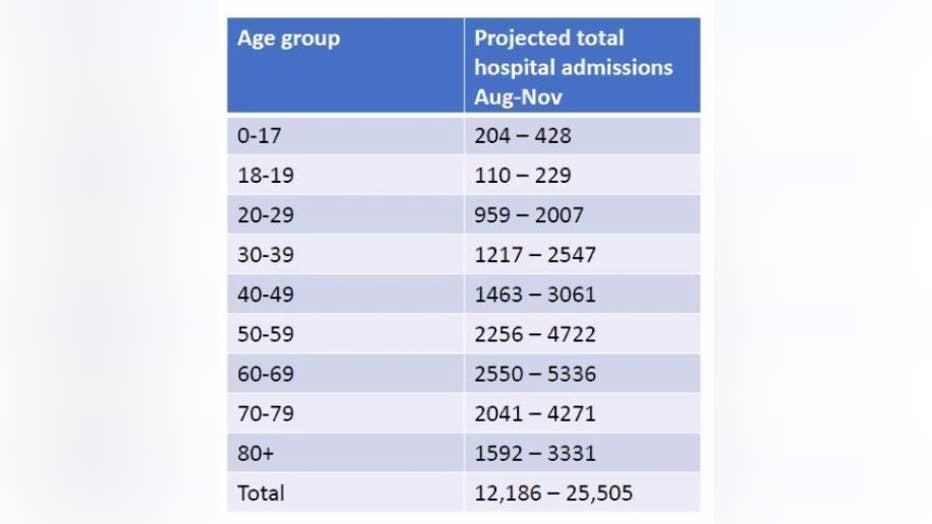 But even with growing evidence about the threat that children face if infected by the coronavirus, the state hasn't ordered any mask mandate for schools. Intense backlash from some parents and school administrators has pushed the conversation about mask rules in districts into tension-filled votes.

Some districts plan to mandate masks, while others won't.

But as data on Wednesday showed, without mask-wearing, 90% of susceptible students may become infected by the end of the semester since children under 12 cannot get the vaccine. Modeling from the University of Michigan presented three scenarios involving masking and kids.

If one infected child attends a class of 25 students, how long would it take for there to be a 50% chance of transmission: 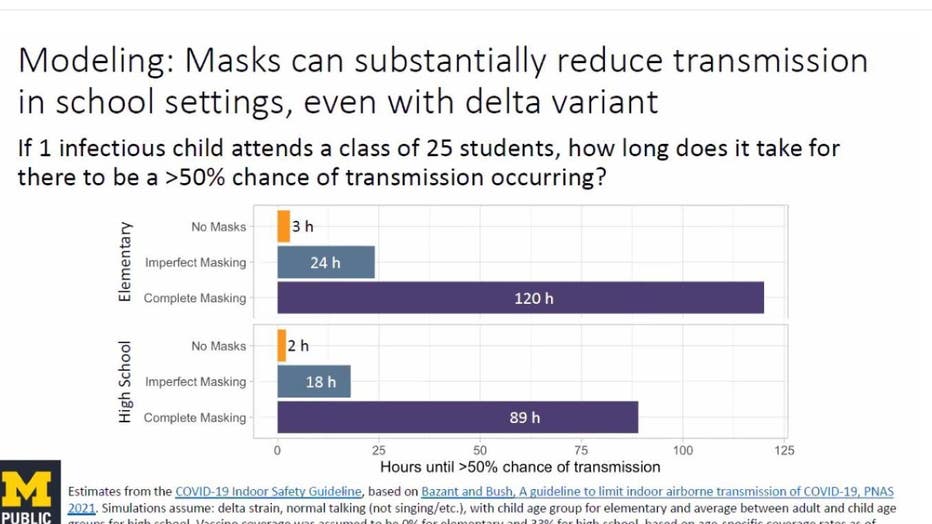 Threats of long covid and Multisystem Inflammatory Syndrom (MIS-C) in children can persist for months and land children in the hospital. An MIS-C infection also makes it more dangerous to administer a vaccine to a child due to a weakened immune system.