CDC begs Americans not to travel for Thanksgiving

The nation’s top public health agency is pleading with Americans not to travel for Thanksgiving, or to spend the holiday with people with whom they are not currently living.

WASHINGTON - U.S. airports saw more travelers this weekend than has been reported since the start of the COVID-19 pandemic, even as public health officials urge Americans to stay home for Thanksgiving due to a rapidly worsening outbreak.

A total of 1,047,934 people were screened at U.S. airports on Sunday, the highest number of passengers reported in a single day since March 16, according to the Transportation Security Administration. Roughly 3 million travelers were screened at checkpoints from Friday through Sunday.

While the number of people flying for Thanksgiving is down by more than half from last year, the crowds are still expected to grow. Next Sunday is likely to be the busiest day of the holiday period, based on trends from previous years.

Last week, the U.S. Centers for Disease Control and Prevention begged Americans not to travel or spend the holiday with people outside their household. 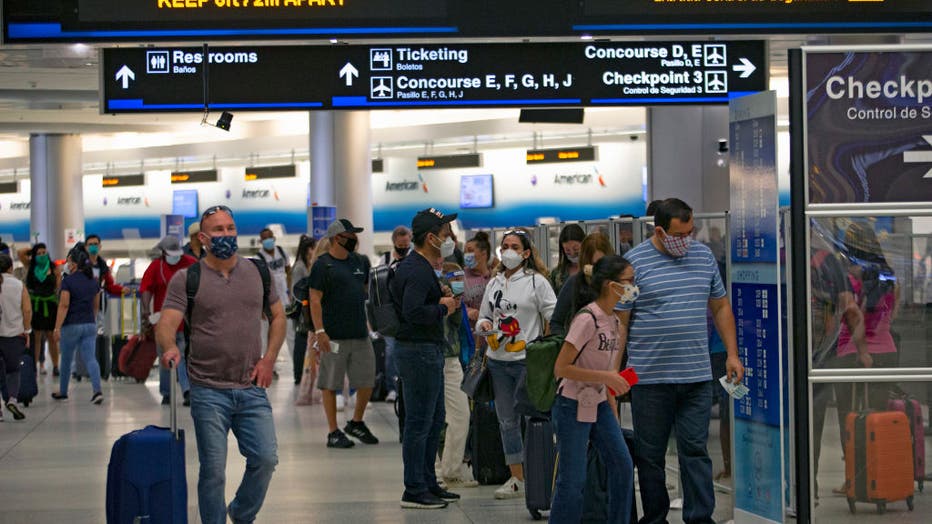 New cases of the virus in the U.S. have sky rocketed to all-time highs, averaging more than 170,000 per day, and deaths have soared to over 1,500 a day, the highest level since the spring. The virus is blamed for more than a quarter-million deaths in the U.S. and over 12 million confirmed infections, according to data from Johns Hopkins University.

Health experts have for months warned of a dark winter due to disregard for mask-wearing and other precautions, the onset of cold weather and crowded holiday gatherings. Many states and cities throughout the country have imposed mask mandates and other safety restrictions in recent days to help curb the ongoing spread of the virus.

“There is so much community transmission all over the United States that the chances of you encountering somebody that has COVID-19 is actually very, very high, whether it’s on an airplane, at the airport or at a rest area,” said Dr. Syra Madad, an infectious-disease epidemiologist for New York City hospitals.

Overall, bookings this year are down about 60% from where they were this time last year. Thanksgiving reservations were ticking upward in early October but fell back again as case numbers surged.

Since airlines have made it easier to cancel tickets, there could be a rash of cancellations closer to the holiday, said John Elder, an adviser to airlines from Boston Consulting Group.

In 2019, a record 26 million passengers and crew passed through U.S. airport screening in the 11-day period around Thanksgiving. This year, the industry trade group Airlines for America isn’t even providing a forecast because things are so uncertain.

Because of tighter restrictions by many governments, air travel in other parts of the world has, in contrast, come to a near standstill. In Europe, traffic between countries was down by 83% in September from a year earlier, and that has only worsened since then because many countries imposed new limits.

RELATED: These are the major retailers closing for Thanksgiving Day this year

More people tend to drive than fly over Thanksgiving, but even car travel is expected to see a drop-off, according to AAA.

Based on surveys in mid-October, the association was expecting 47.8 million people to drive to Thanksgiving gatherings, down 4% from last year. But AAA said the drop could prove to be even bigger, given the worsening crisis.

The holidays close out a bleak year for U.S. travel. Travel spending is expected to drop 45% from 2019 levels, to $617 billion, according to the U.S. Travel Association, a trade group.

Last week, the White House Coronavirus Task Force held its first briefing since July. Both Dr. Anthony Fauci and Dr. Deborah Birx, who are members of the task force, urged Americans to “double down” on efforts to prevent the spread of COVID-19 and said cases are spreading “more rapidly” than ever.

Fauci, the nation’s top infectious disease expert, touted the safety of the vaccine development process, which is nearing the finish line, but said the country needs to continue wearing masks and practicing other safety measures in the meantime.