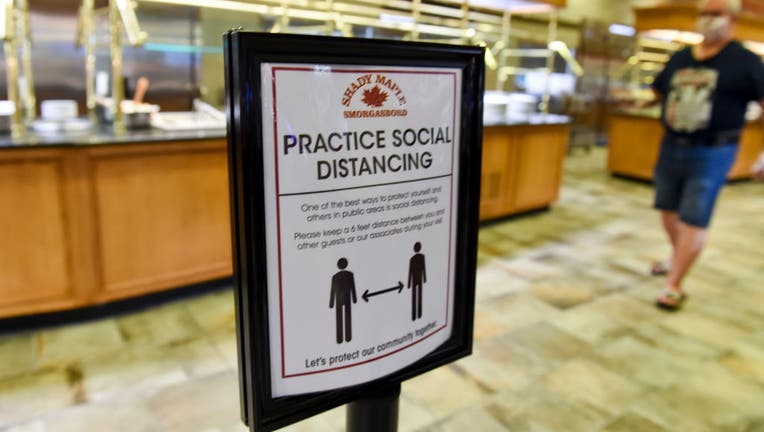 A new study from the Massachusetts Institute of Technology challenges the widespread social distancing guidelines, asserting that the "six-foot rule" is "inadequate" in mitigating indoor transmission of COVID-19.

MIT professors Martin Bazant and John Bush found that people who maintain six feet of distance indoors are no more protected than if they were 60 feet apart – even when wearing a mask.

The peer-reviewed study, published in Proceedings of the National Academy of Science of the United States of America, focused on factors such as time spent indoors, air filtration and circulation, immunization and variant strains.

"What our analysis continues to show is that many spaces that have been shut down in fact don't need to be," Bazant explained to CNBC. "Often times the space is large enough, the ventilation is good enough, the amount of time people spend together is such that those spaces can be safely operated even at full capacity and the scientific support for reduced capacity in those spaces is really not very good."

"I think if you run the numbers, even right now for many types of spaces you’d find that there is not a need for occupancy restrictions," he added.

RELATED: After getting fully vaccinated against COVID-19, how long does protection last?

Both Bazant and Bush teach applied mathematics, while Bazant also teaches applied chemistry. As such, the professors developed a calculation to determine the risk of exposure to COVID-19.

Guidelines suggest that hours inside at social distances would be safe, but the study suggests otherwise.

"The distancing isn't helping you that much and it's also giving you a false sense of security because you're as safe at six feet as you are at 60 feet if you're indoors," Bazant said. "Everyone in that space is at roughly the same risk, actually."

The updated CDC guidelines, announced on March 19, signal the agency’s turn away from the 6-foot distancing recommendation.

Pathogen-laced droplets travel through the air due to the various activities people casually engage in, even simply eating, speaking and breathing. Original guidance focused on droplets that were propelled by coughing or sneezing, but new research backs the idea that airflow will carry droplets throughout a room.

Even the type of activity mattered significantly: exercising, singing or shouting increased pathogen output, acting to decrease the time that someone can spend indoors before risking greater infection "by an order of magnitude."

The study suggests that it would be just as effective to open windows or install new fans to keep air moving as it would to install a new filtration system – though, significantly less expensive.

Time spent inside is significantly more important to focus on than distance, according to Bazant and Bush.

"If you look at the air flow outside, the infected air would be swept away and very unlikely to cause transmission," Bazant said. "There are very few recorded instances of outdoor transmission."

"Crowded spaces outdoor could be an issue, but if people are keeping a reasonable distance of like three feet outside, I feel pretty comfortable with that even without masks frankly."