The woman's son spent nearly $500 on a watch that wouldn't even power on.

CLEVELAND, Okla. - An Oklahoma mom is urging shoppers to take caution when purchasing electronics at Walmart after her son was sold a demo Apple Watch at the discount retailer.

Kristen Boe said her son Bruno purchased what they believed to be an Apple Watch for $471 from a Walmart located in Cleveland, Oklahoma, on Nov. 30.

“He met me at the front of the store, we got into the car and opened the box,” Boe wrote in a post on Facebook on Dec. 20. “Inside the box we have what appears to be a Apple Watch but it won’t come on.” 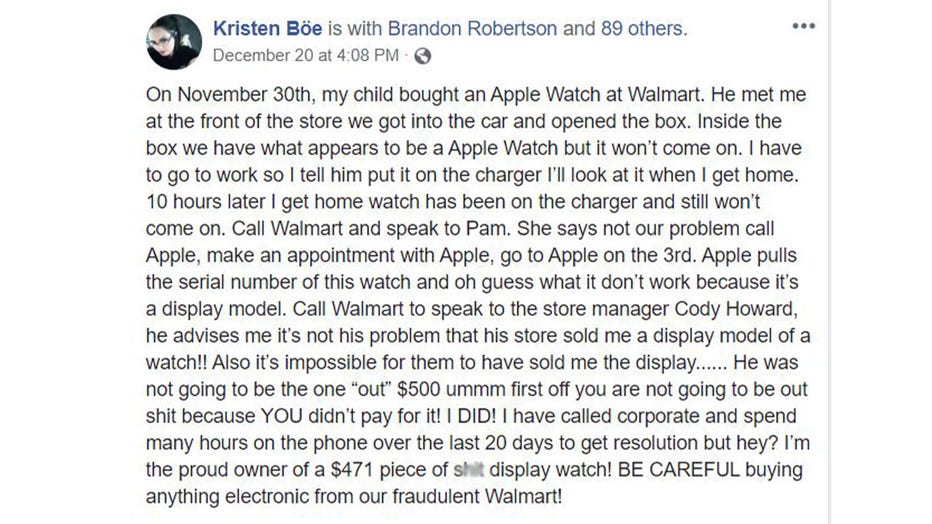 Kristen Boe shares details on Facebook about her shopping experience at Walmart after her son was sold a demo Apple Watch. (Kristen Boe)

Boe thought the watch could possibly be dead and instructed her son to charge the device. However, after a full day of charging, the watch still wouldn’t power on.

When Boe contacted Walmart about the defected device a store associate deferred her to Apple.

“She says, ‘not our problem call Apple, make an appointment with Apple,’” Boe explained.

After taking the watch to an Apple Store on Dec. 3, Boe was finally able to get to the bottom of why the device wouldn’t work — it wasn’t real.

“Apple pulls the serial number of this watch and (says) oh guess what it don’t work because it’s a display model,” Boe wrote. 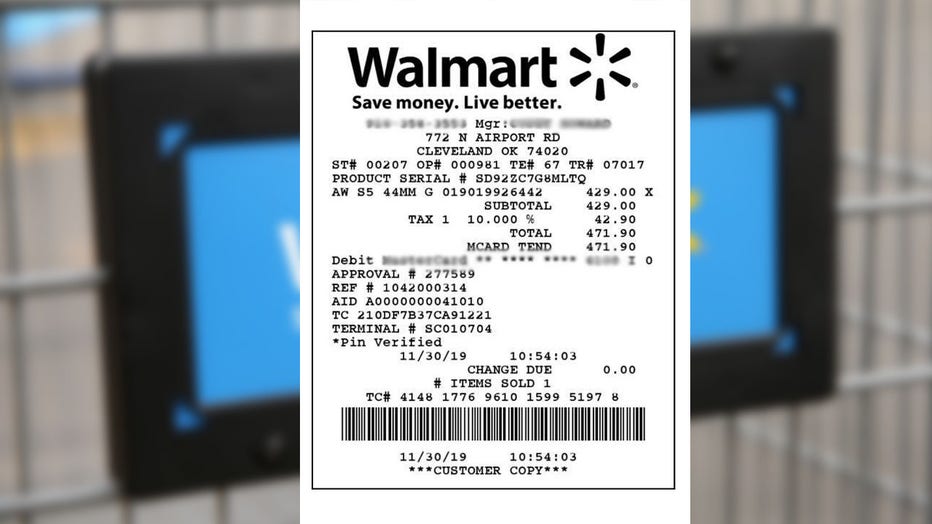 Photo of Boe's receipt from the purchase on Nov. 30. (Kristen Boe)

Boe reached out to Walmart again in an attempt to return or exchange the bogus watch, but said the store manager refused to take the item back.

Walmart's return policy states that most electronic items can be returned within 30 days of purchase for a full refund if accompanied by the manufacturer's original packaging and receipt.

Apple Watches are not explicitly listed as ineligible for return on the company's website.

Boe escalated the issue to Walmart’s corporate office, but after 20 days she said the company closed her ticket.

On Dec. 24, one day after KTUL reported on Boe’s debacle, she said the same store manager called and offered to let her exchange the watch.

“He claimed he had spoke to his boss and hated that the media had to be involved,” Boe said. “They also claimed that this is not their fault, it’s Apple’s fault.”

Boe told the manager ultimately Walmart was responsible because it was his store that sold the faulty device.

The store manager confirmed the exchange occurred on Dec. 24, but would not comment further.

Corporate offices for Walmart did not respond to a request for comment on the issue.