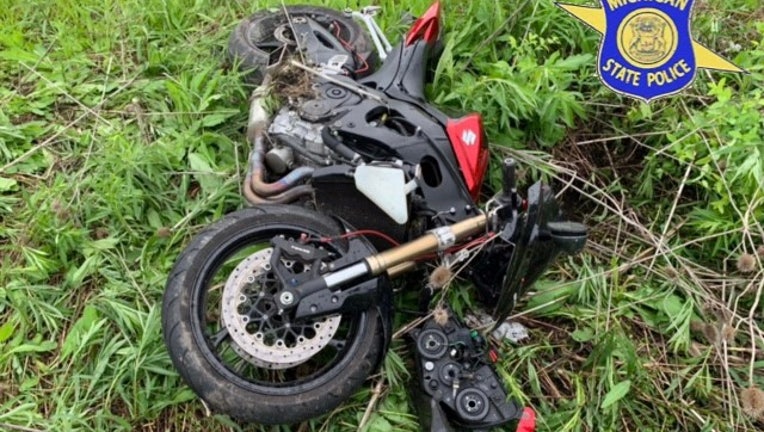 SAGINAW COUNTY, Mich. (FOX 2) - A motorcyclist crashed on I-75 in Saginaw County moments after police clocked him going 141 mph on Friday morning.

A Michigan State Police initially clocked the driver at 91 mph on the north side of the freeway near King Road north of Bridgeport around 9:30 a.m. The trooper tried to stop the motorcyclist, but he fled.

The trooper notified dispatch but did not pursue the driver. About a mile down the road, another trooper working a traffic stop saw the motorcycle and clocked it at 141 mph as the driver changed lanes while passing the trooper.

Dispatch then received a call about a single vehicle crash at M-46. Police said the motorcyclist, who crashed while trying to exit the freeway, fled on foot.

The 22-year-old driver from Montrose was found about ¼ mile from the crash site. Police said he ran from the trooper because the bike was uninsured and unregistered, and he did not possess a cycle endorsement. He suffered minor injuries in the crash.

He is facing fleeing and eluding, reckless driving, registration, insurance, and license violation charges. The Saginaw County prosecutor will review the case to determine if additional charges are warranted.

Police said the motorcyclist was spotted by a trooper conducing a Crash Awareness and Reduction Efforts patrol. These patrols are stepped up through this Memorial Day Weekend.