DETROIT (FOX 2) - The sounds of gunshots got Ron Burgett out of bed early Wednesday morning on Winston Street near Six Mile and Telegraph.

"I heard bam, bam, bam," he said. "Then they mentioned they had to shoot the dogs."

Detroit Police were assisting bondsmen in trying to serve a warrant for outstanding traffic tickets on the resident of this home.  But as the officers went into the backyard to try to find the homeowner they came across pit bulls.

"There were two pit bulls in the backyard, when was chained, one wasn't. One aggressively charged the officer," said Capt. James Demps, Detroit police.

That would be "Bear." The captain said the officer had no room to retreat and to protect himself, he fired shots at - "Bear."

"Four shots for one dog that was running towards the gate. I just don't get it," said George Knight.

Luckily we're told, the dog was not killed and will be okay.  But the dogs weren't in very good condition anyway.

"Yes he was about this big around his neck, not good," Demps said. 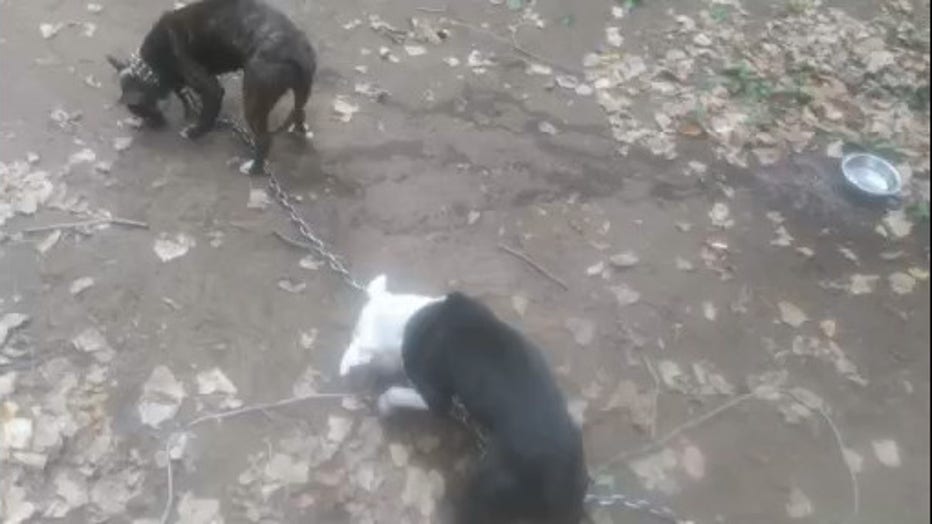 Animal control picked up both dogs and the homeowner was given a ticket for harboring dangerous animals. In fact, Knight said her neighbor didn't take care of his dogs, she did.

"So you go over here and you put the food open fence.   And then I was going to the yard and play with them so they could have human contact," she said.

FOX 2: "It looks like this guy's treatment of the dogs was worse than the outstanding traffic tickets."

By the way, the neighbor got away this time, but he'll still have to answer to the outstanding traffic tickets and now a new dangerous animal charge.