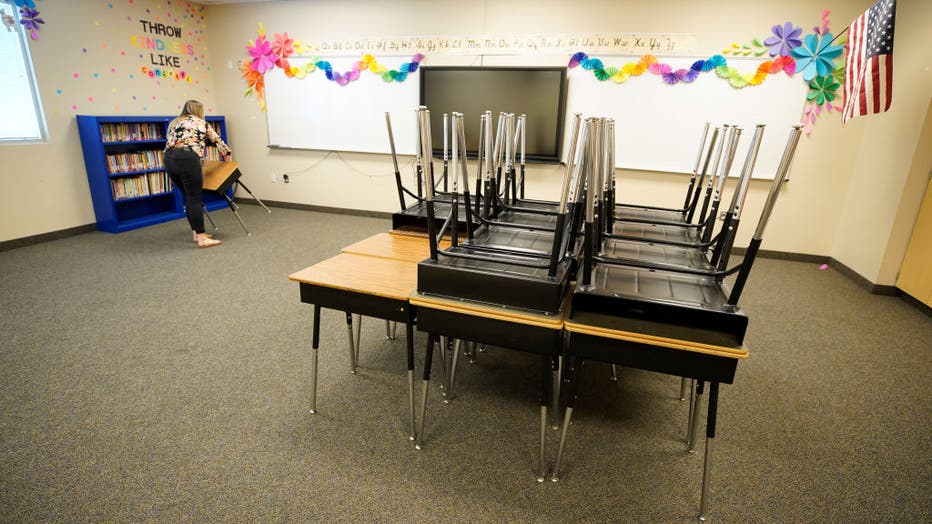 A teacher starts to reset up her classrooms with new rules on social distancing at Freedom Preparatory Academy as they begin to prepare to restart school after it was closed in March due to COVID-19 on August 5, 2020 in Provo, Utah. The school is pla

The state got nearly $1.8 billion to help schools under the package enacted in late December. But just $839 million, less than half, was approved 2 1/2 months later when Democratic Gov. Gretchen Whitmer signed authorizing legislation Tuesday. That's because Republicans tied about $841 million to a measure she vetoed that would have ceded certain state pandemic powers solely to local health departments.

Noting that GOP legislators had not negotiated with her, the governor vetoed $652 million in other aid, including $97 million in federal school funds, until a deal is reached.

The new federal bill, which Biden will sign Friday, requires states to allot funds to districts "in an expedited and timely manner and, to the extent practicable, not later than 60 days after the receipt of such funds."

Robert McCann, executive director of the K-12 Alliance of Michigan, a coalition of superintendents, said the group had expressed frustrations over the delayed funding to Michigan Sen. Debbie Stabenow, a Democrat who added the provision.

"We appreciate her work on addressing that," he said. "Schools across the nation are putting federal dollars to work to support their students and aid in their recovery, but here in Michigan, our students are being left behind because Lansing would rather wage partisan battles and use school aid dollars as some misguided bargaining chip as part of that. It has to stop."

Meanwhile, there were no outward signs that the impasse between the Republican-led Legislature and Whitmer was subsiding. The House on Wednesday quickly passed bills to restore the $652 million that was vetoed, including $405 million in state funding for pandemic-affected businesses. But many Democrats voted no, pointing out -- as the governor has -- that GOP legislators did not include all federal funding for rental home and food assistance.

"Now, more than ever, we need to be on the same page, working together, working collaboratively with our governor to make sure these resources are delivered now," said Rep. Rachel Hood, of Grand Rapids.

House Appropriations Committee Chairman Thomas Albert, in a letter to state budget director Dave Massaron, said he was willing to meet and negotiate funding "as soon as the administration agrees to meet with the Legislature to negotiate its epidemic orders."

GOP legislators have criticized Whitmer for not giving them a say in state health department measures that are designed to limit the spread of the virus but which business groups and others say go too far.

"The governor's overall objection to this relief seems to be that she didn't have input and wasn't able to negotiate on the policy," said Albert, of Lowell. "I wonder if the governor now knows how the rest of us have felt over the past year."

The fate of the $841 million in emergency K-12 aid, which was linked to Republicans' thwarted demand that Whitmer let only local health departments close schools and prohibit sports, remained unclear amid a legal review.

Michigan is due to receive billions in additional funding under the package headed to Biden's desk, including $3.8 billion for schools.