COMMERCE TWP, Mich. (FOX 2) - For Emme and Ella Barclay, all they wanted for Christmas was a new family member. Before Thanksgiving was even here, they had already written their letters to Santa with one thing: a puppy. Santa came early to make that happen.

Nicole Barclay of Commerce captured the moment her two young daughters discovered the puppy inside a box on the front porch.

Nicole Barclay of Commerce, Michigan, captured the moment her two young daughters, Emme and Ella, discovered the 10-week old golden retriever puppy, given to them as an early Christmas present at their home on December 1.

Barclay said the resounding request to Santa Claus this year was for a puppy. The girls, and their two-year-old sister, Ava, wrote and delivered their letters to Santa before Thanksgiving.

Then Santa got to work with Nicole and Brian researching puppies and even meeting the 10-week-old golden retriever, named Skye.

On December 1, Nicole and Brian left to "attend a Christmas party" but were actually picking up Skye and bringing them home. A neighbor helped deliver Skye on the front porch, inside a gift box, and then rang the doorbell.

Emme and Ella opened the door and Skye pokes out of the box. Both girls covered their mouths, unable to contain their shrieks of joy for their new family member.

Watch it in the video above. 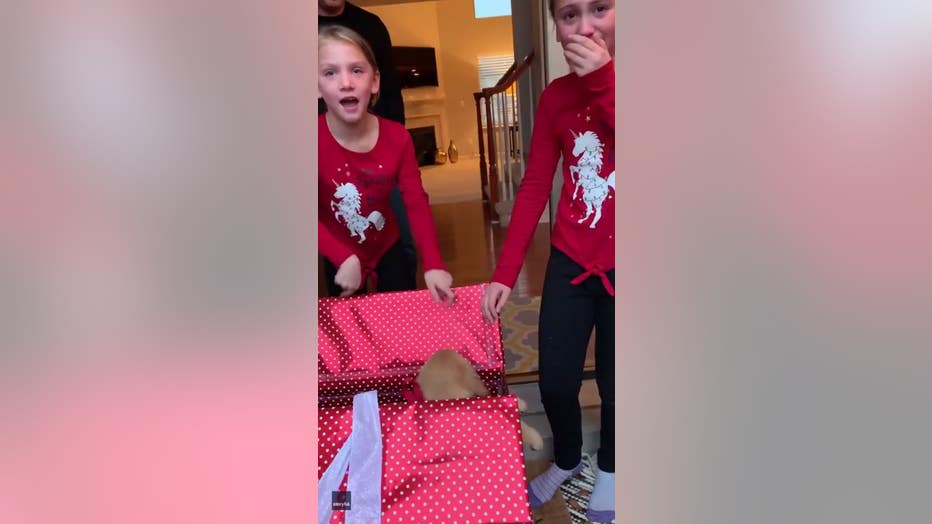