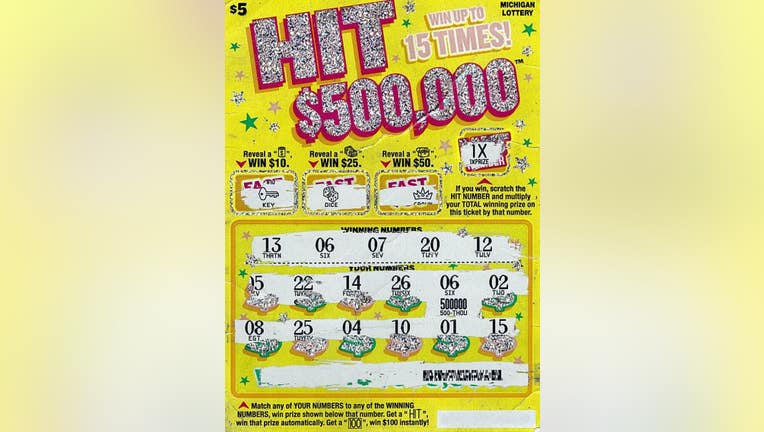 OAKLAND COUNTY, Mich. (FOX 2) - An Oakland County woman who says she regularly plays instant tickets in the Michigan Lottery turned a $5 chance into a $500,000 win.

The Michigan Lottery said a 51-year-old woman, who is choosing to remain anonymous, won the big prize in the aptly-named ‘Hit $500,000’ scratch-off game.

The game is pretty simple - you get one row of ‘winning numbers’ and two rows of ‘your numbers’. If any of your 12 numbers match any of the 5 winning numbers, scratch the prize under the winning number to reveal how much you win.

According to the lottery, the woman said a friend bought the scratch-off ticket at Spring Valley Party Store in Highland recently while she waited in the car.

"I play all of the Lottery games, but I especially like playing instant tickets," said the player. "My friend went into the store and bought the ticket for me, and I scratched it when he got back to the car. When we saw the prize amount, we didn’t believe it was real. I took the ticket back into the store to have it checked. When the cashier confirmed the amount, I couldn’t believe it! I am still in shock."

As for what she'll do with it, the woman said she'll pay bills and go on vacation.